The state government has now decided to eliminate all kinds of intoxicants and also enforce strict laws to deal with the menace. 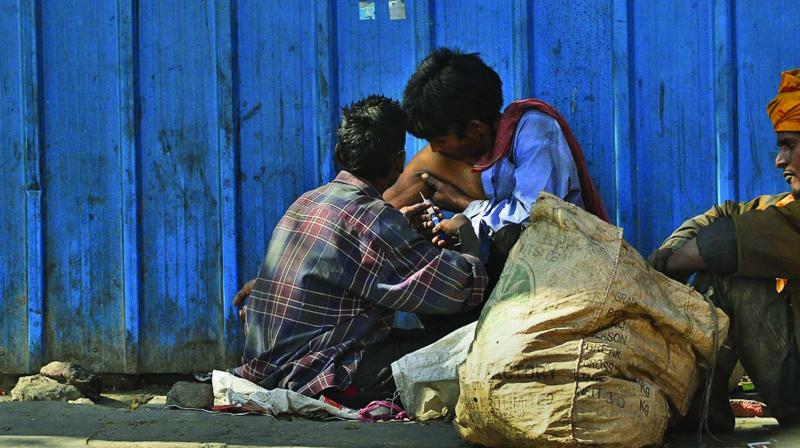 Survey reports also show that around 25 per cent cases of drug and substance abuse were recorded within one year between April 2016 and March 2017.

Patna: Bihar chief minister Nitish Kumar has not missed an opportunity to showcase the liquor prohibition that he has enforced in the state, but a year after the ban was imposed, a survey conducted by a team of experts showed that cases of substance abuse have increased. After reports of rising cases of drug abuse, the state government has now decided to eliminate all kinds of intoxicants and also enforce strict laws to deal with the menace.

Even Vishal Kiran (name changed), a young theatre actor trying to quit the habit of cannabis smoking, believes that strict rules should be made to eliminate drug abuse in Bihar. Kiran, who was admitted to a renowned rehabilitation centre a month ago, said he “started using cannabis after liquor consumption was prohibited, but it’s hard to quit the habit now”.

Same was the case with 22-year-old Amit (name changed) who instantly missed midnight parties with his college friends after the prohibition and got hooked onto smoking cannabis.

There are many such patients who are being treated in various rehabilitation centres. A recent study shows that there has been a surge in substance abuse cases after a statewide ban on liquor. Survey reports also show that around 25 per cent cases of drug and substance abuse were recorded within one year between April 2016 and March 2017.

Excise department data shows that after prohibition rules were imposed in the state, 6,674.88 kg bhang, 1,272 kg marijuana and 73.87 acres of opium plantation were seized during various raids. Experts also say that till September last year, de-addiction centres screened around 2,695 cases of alcohol addiction, but now around 25 per cent cases are related to substance abuse.

“Regular raids are being conducted and people involved in the activity are being arrested. We will be able to curb the drug menace very soon,” Aditya Kumar Das, state excise commissioner, told this newspaper.

There are also reports that the state government has now started to communicate with other centres functioning outside Bihar. When asked whether the government has constituted team of doctors who are being trained at NIMHANS in Bengaluru to deal with the situation, Mr Das said, “Even the Centre has been running such programmes, I can only say that we have been successful in banning liquor consumption in the state and we will soon be able to eradicate substance abuse.”

Rakhi Sharma of Disha rehabilitation and deaddiction centre in Patna told this newspaper that the “switch over dependency to drugs, mostly smoking cannabis and the consumption of opium products, have gone up in the last one year”.

She further said that “strict prohibition rules resulted in a drastic fall in liquor consumption, but at the same time, substance abuse has gone up due to a lack of efforts from the officials”.

Figures released by Disha, which runs around six large rehabilitation centres all over the state, showed that within one year the number of patients admitted for treatment was 6,634, out of which 2,469 patients were between 18 to 35 years of age and 2,971 cases were middle-aged men.

According to Pratibha Singh, a senior psychiatrist working for a private deaddiction centre in Patna, “Most patients who come for treatment are youths and middle-aged men.”

She said that the rise in drug abuse in the state was due to the availability of products like cannabis, weeds, inhalants and pain killers. “In rural areas, men who used to spend on liquor are now smoking marijuana in groups and that doesn’t hit their pocket at all. This is where the government’s calculation failed,” she said.