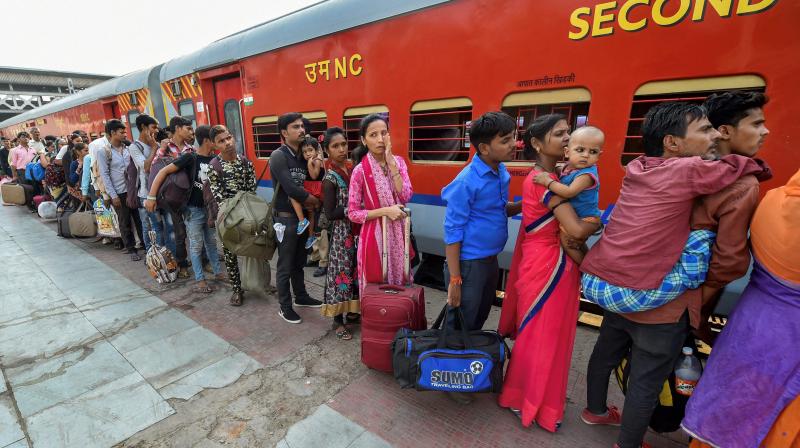 Functioning of construction sites, small-scale industries, hotel, restaurant and several other sectors to come to a standstill (PTI)

Kochi: Kerala is witnessing an exodus of migrant workers in last couple of weeks, due to the apprehensions over increasing number of Covid-19 cases.

Functioning of construction sites, small-scale industries, restaurant and several other sectors will come to a standstill if the reverse migration of the labourers from far-off states continues for long.

The railway police and health authorities are screening migrant workers at railway stations before they board trains.

Meanwhile, some of the migrants skip train journey fearing the chances for contracting virus and book own vehicle for small groups for return journey.

Perumbavoor in Ernakulam district, known to be the migrant labourers’ hub in Kerala, is witnessing mass departure of workers.

Migrant workforce in hotels and restaurants are more concerned of the virus as they have high public contact. Many eateries are forced either to shut down or to reduce working hours due to fleeing of migrants. However, the hundreds of labour-intensive plywood units in the area still have migrant workforce. The workers are apprehensive of the virus outbreak and are prepared to return to their native place any time
- Nizar M M, a plywood unit owner in Perumbavoor

Migrant labourers working in the hospitality sector in tourism destinations have also left as most of them have been closed down or functioning partially due to the restrictions imposed by the government.

However, construction sites of major infra projects like Kochi Metro have not yet been impacted by the exodus of migrant workers.

“The contractor agencies have not reported any fall in workforce at the sites,” said sources with Kochi Metro Rail Limited.

“Currently, the functioning of the small-scale construction sites is not hit as most of the workers are Keralites. But the big construction sites, employing huge number of migrant workers, will be hit soon,” said Eldho Varghese, a building contractor.