India   All India  18 Mar 2019  By scuttling UNSC move on JeM chief, China has flunked the terrorism test
India, All India

By scuttling UNSC move on JeM chief, China has flunked the terrorism test

If China continues to block this designation, these countries may be forced to pursue other actions at the Security Council. 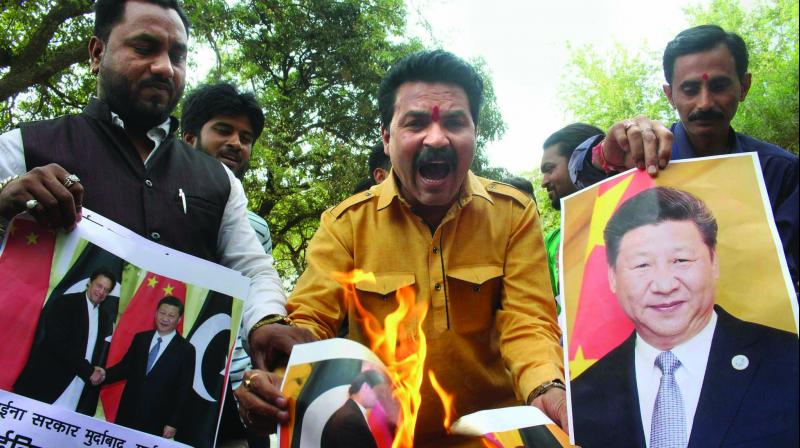 Sanskriti Bachao Manch activists raise slogans during a protest against Chinese President Xi Jinping after China placed a hold and blocked the attempt to list JeM chief Masood Azhar as a global terrorist in Bhopal on Thursday. (Photo: PTI)

China has blocked four bids in 10 years to get Masood Azhar listed as a United Nations (UN)-designated global terrorist. Experts say such an act of irresponsibility by a major power raises questions of its suitability to play a constructive part in regional and world affairs, including in Afghanistan, which shares its border with China and Pakistan, and where a peace deal is being sought with the Taliban to pave the way for the withdrawal of US troops from that country.

China scuttled a serious move in the United Nations Security Council (UNSC) to designate the Jaish-e-Mohammed (JeM) chief as an international terrorist. This is an expression of woolly diplomacy and antagonism on the question of war and peace. Masood Azhar is the founder and head of JeM, and he meets the criteria for this designation set by the UN. The JeM has been responsible for numerous terrorist attacks and is a threat to regional stability and peace in South Asia.

Ironically, China was the only country to oppose Masood Azhar’s listing as an international terrorist at the UNSC. The resolution was moved by the US, France and the United Kingdom under the 1267 Al-Qaeda sanctions committee. Its supporters included Australia, Japan, and the South Asian Association of Regional Co-operation (Saarc) members Bhutan, Bangladesh and the Maldives. China’s move to veto the listing of Masood Azhar is inconsistent with its own goals of combating terrorism and furthering stability in the South Asian region. China’s move has frustrated the other members of the UNSC.

Outraged by China blocking the move for a fourth time, some UNSC members warned that they “may be forced to pursue other actions” at the Security Council if Beijing continued with this policy. Beijing previously put a technical hold on similar proposals at the UNSC three times.

If China continues to block this designation, these countries may be forced to pursue other actions at the Security Council. “It shouldn’t have to come to that,” said a Security Council diplomat, in an unusually tough warning to China.

India is hugely disappointed over China’s decision, but the ministry of external affairs (MEA) said it will “pursue all available avenues” to bring to justice the terrorist leaders involved in the attack on Indians. Not entirely unexpected, but nonetheless a slap to India’s face after last month’s bloody suicide-bombing in Kashmir, it has raised serious questions about the benefits of Modi’s photo-op diplomacy with Xi Jinping. This one won’t be undone by another romantic stroll through Wuhan, indicating that such a move by Beijing would only escalate the tension between India and China.

China’s move to hold the listing is inconsistent with its own stated goals of combating terrorism and furthering regional stability in South Asia. This is the fourth time that China has placed a hold on this listing. “China should not prevent the committee from doing the job the Security Council has entrusted it to do,” say the Security Council diplomats.

The Trump administration had said that Masood Azhar meets the criteria for designation by the UN. Our views on the JeM and its founder are well known. The “JeM is a UN-designated terrorist group,” state department deputy spokesperson, Robert Palladino told reporters. “The case for designating Masood Azhar the leader of a group the UN already calls an al-Qaeda-affiliated terrorist organisation is undeniable. I would say that the US and China share a mutual interest in achieving regional stability and peace and that a failure to designate Masood Azhar would run counter to this goal,” Mr Palladino said.

Several members of an American thinktank slammed China for its decision delaying the Masood Azhar listing. Congressman Brad Sherman described the Chinese move as unacceptable. “Today, China doubled down on a very bad bet. It blocked yet another round of UN sanctions on Pakistan-based JeM chief Masood Azhar weeks after the group claimed credit for the deadliest terror attack in Kashmir,” Jeff Smith from the Heritage Foundation said. “Once again, China has blocked the UN from imposing sanctions on Masood Azhar, the leader of the JeM, which carried out the Pulwama attack in India in February. This is unacceptable,” he said, adding “I urge Beijing to allow the UN to place sanctions on Masood Azhar, the leader of a UN-recognised terrorist organisation.”

China is playing a dangerous game. Bejing’s strategic moves to contain India with Pakistan’s help is understandable,but using the instrumentality of terrorism is unacceptable not only to India but to the whole world.