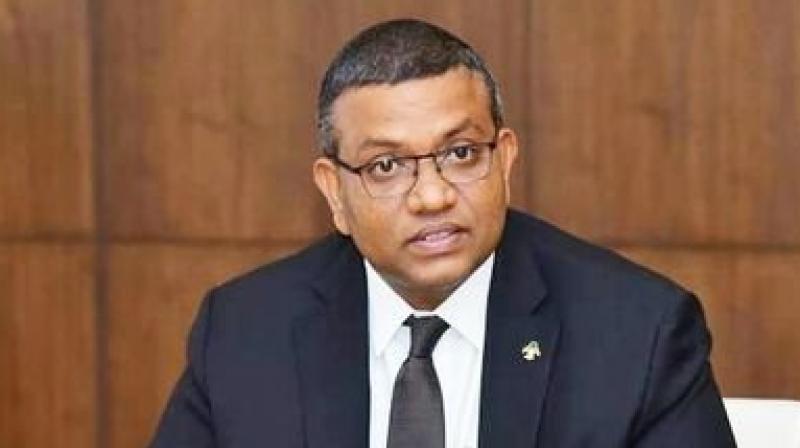 Indian Ocean archipelago's High Commissioner to India Ahmed Mohamed said, that while there has been a steady stream of high-level visits from the island nation to India, the same was not reciprocated -- an issue which many in Male feel is one of the factors for ties going south. (Photo: Twitter/@ahmedMDV)

New Delhi: Seeking to minimise the damage caused by a senior Maldivian minister's remarks on Jammu and Kashmir, Indian Ocean archipelago's High Commissioner to India Ahmed Mohamed has said the Kashmir issue was a bilateral matter that should be "resolved amicably" between India and Pakistan.

Admitting that there was an "environment of mistrust" between India and Maldives caused by a host of issues in recent years, the envoy said, "lack of engagement" was responsible for the current state of affairs, but asserted that the two countries should let "bygones be bygones".

The high commissioner said that while there has been a steady stream of high-level visits from the island nation to India, the same was not reciprocated -- an issue which many in Male feel is one of the factors for ties going south.

Asked about the recent comments of a senior Maldivian minister bracketing the Kashmir situation with the current state of affairs in the Maldives, the high commissioner said, "It was a remark to emphasise the stand that the Maldives has been taking continuously and consistently since the 1970s. We have always maintained the position that it is a bilateral issue that needs to be resolved amicably between the two countries."

"We have always maintained the position that there needs no intervention by a third country. Hence, reiteration of our position and an example from the local context to state that the existing crisis in Maldives is an internal issue which needs no foreign intervention," Mohamed said.

Mohamed Shainee, a senior minister in President Abdulla Yameen's government, had reportedly told a group of visiting Indian reporters, "Why haven't we gone into the Kashmir issue... and asked to be (an) intermediary? Because they are internal matters... India should stay away from our issue. We are independent and capable of dealing with the situation. If we need help, we will let India know."

Reacting sharply, Indian officials had termed the remarks as "unfortunate". Asserting that the two situations were not comparable, a senior official had said, "While the situation in Kashmir is due to state-sponsored terrorism, the other is due to subversion of democracy."

Currently, India and Maldives have a strained relationship that has been caused by a number of issues, including the signing of a free-trade agreement between the Maldives and China amid increasing proximity between Male and Beijing, and imposition of emergency by the Yameen government.

"The need now is to start with a clean slate and let bygones be bygones," the envoy stressed, while making a strong pitch for a high-level visit from India. "It will make a lot of difference."

The Maldivian president has visited India twice apart from visits by other leaders, including the Maldivian foreign minister, he noted.