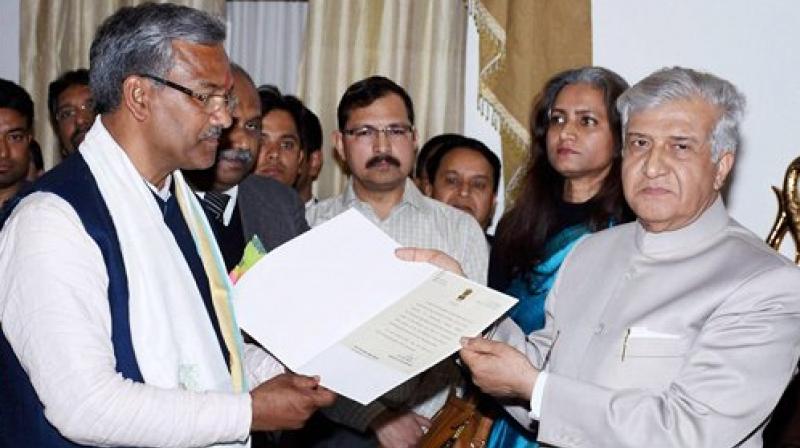 Dehradun: Senior BJP leader and former RSS pracharak Trivendra Singh Rawat will take oath today as the next Chief Minister of Uttarakhand where the saffron party won 57 of the total 70 seats in the recently-concluded Assembly elections.

Rawat, who will be sworn in by Governor Krishna Kant Paul at the Parade Ground at 3 pm here, will succeed Congress leader Harish Rawat to become the eighth chief minister of the hill state.

Narendra Singh Tomar, the BJP’s central observer for the legislature party’s meeting, said Rawat’s name was proposed by senior leaders and MLAs — Prakash Pant and Satpal Maharaj — and was seconded by a host of other legislators.

Notably Satpal Mahraj, also a former Union minister, was among the contenders for the top job. He is likely to be appointed as the Assembly Speaker.

Sinha further said in order to make Uttarakhand people happy, it was important for the two leaders to attend swearing-in ceremony on Saturday.

Rawat defeated Congress' Hira Singh Bisht in the Doiwala constituency with a margin of over 24,000 votes.

He was elected to the assembly for the third time and was state agriculture minister in 2007-2012.

Rawat, who is considered to be close to BJP chief Amit Shah, was given responsibility of regional election in-charge during 2014 Lok Sabha elections in Uttar Pradesh, where the BJP emerged victorious.