Earlier on February 8, a Gujarat court convicted 49 accused and acquitted 28 others 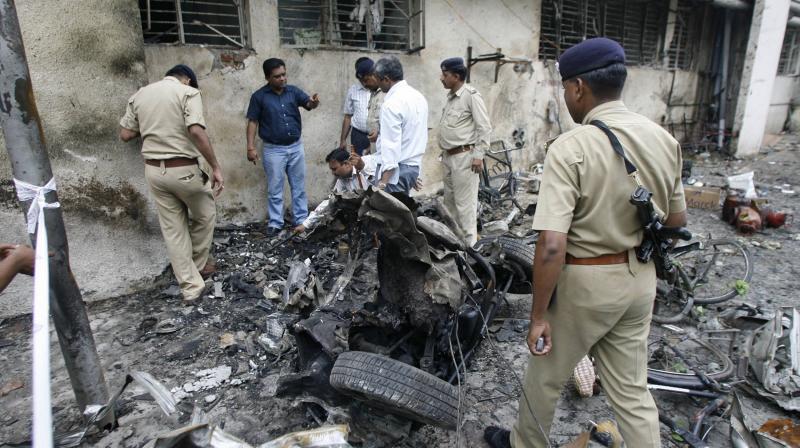 This file photo taken on July 27, 2008 shows Indian forensic experts collecting evidence from a blast site outside the Civil Hospital in Ahmedabad following a series of bombings the day before which killed dozens. (Photo: AFP)

Ahmedabad: A special court here on Friday awarded death sentence to 38 convicts in the 2008 Ahmedabad serial blasts case, which claimed 56 lives and left over 200 injured.

The court sentenced 38 of the 49 convicts to death under provisions of the Unlawful Activities (Prevention) Act (UAPA) and Section 302 of the Indian Penal Code. The 11 others were sentenced to life in jail till death.

Judge A R Patel also awarded compensation of Rs one lakh each to those killed in the blasts, and Rs 50,000 for each victim with serious injuries and Rs 25,000 each for those with minor ones.

The court also imposed a fine of Rs 2.85 lakh each on the 48 convicts.

Patel had on February 8 declared 49 of the total 78 accused as guilty under various offences of the Indian Penal Code, including for murder, sedition and waging war against the state, as well as under offences of the UAPA and Explosive Substances Act.

Bombs went off in Ahmedabad on July 26, 2008, at various spots including the state government-run civil hospital, Ahmedabad Municipal Corporation-run LG Hospital, on buses, parked bicycles, in cars and other places, killing 56 persons.