India   All India  18 Feb 2019  Tense Valley shuts down over attacks on Kashmiris
India, All India

Tense Valley shuts down over attacks on Kashmiris 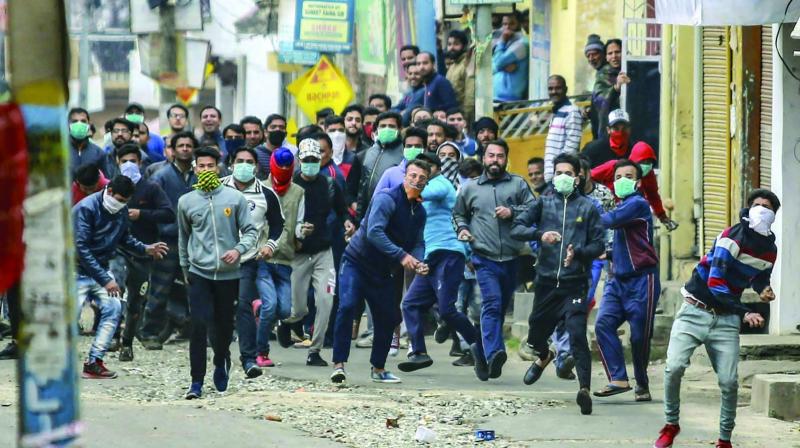 Protestors clash with police personnel during a curfew imposed on the third day in Jammu on Sunday. (Photo: PTI)

Srinagar: There have been more attacks on Kashmiri traders and students across the country amid persisting anger over the killing of 40 CRPF personnel in Thursday’s suicide attack near Srinagar. This impelled the vast majority of the people of the Kashmir Valley Sunday to obey the call for a one-day strike over the “disturbing” incidents.

Reports pouring in here from different parts of the country said that Kashmiri Muslims are being evicted and threatened after Thursday’s deadly attack. Kashmiri traders and students have faced a backlash mainly in Haryana, Uttarakhand, Rajasthan, Himachal Pradesh, Bihar and other states. At some places, Kashmiri students were restricted from universities and colleges a-nd, at least, one was arrested also for their allegedly making anti-nati-onal remarks on social media in the backdrop of the suicide attack.

While the Union home ministry has saud no stone would be left unturned to protect the life and property of Kashmiris living, working or studying outside their home state, the Jammu and Kashmir government is reported to have approached its counterparts in the states where such incidents have taken place, requesting them to ensure restraint. The J&K government has also appointed liaison officers at all major locations to coordinate with university authorities and local police "to ensure the safety of Kashmiri students", an official spokesman said.

The situation was reviewed here on Sunday at a meeting of officials, which was attended also by Khurshid Ahmed Ganai, the advisor to the governor and Kashmir’s divisional commissioner Baseer Ahmad Khan. Mr Khan said that he is in constant touch with the authorities in different states and that they have assured him of providing adequate security to the students. He also said that helplines have been set up by his office and the J&K police for registering complaints and responding to queries of the students and their parents.

Normal life was paralysed across Kashmir Valley on Sunday due to a shutdown called by Kashmir Economic Alliance, Kashmir Traders and Manufacturers Forum and other trade bodies. These bodies have demanded that the state government should immediately initiate steps to ensure the safety of Kashmiri traders, students and other residents from the Valley working or studying in different parts of the country. They also protested against “continued attacks on and harassment of Kashmiri Muslims by goons in Jammu”.

Meanwhile, Jammu continued to reel under curfew on the third consecutive day on Sunday. The winter capital of the restive Jammu and Kashmir was brought under indefinite curfew and police and paramilitary reinforcements were fanned out in the city on Friday to enforce it after incidents of arson and attacks on the members of minority Muslim community during a bandh called by Jammu Chamber of Commerce and Industry (JCCI) against the massacre of CRPF jawans in the suicide attack.

A report from Jammu said that while the curfew continued there were stone-pelting incidents and clashes in, at least, three areas of the city overnight. At places, crowds confronted each other by chanting slogans. A police official said that the crowds raised provocative slogans, exacerbating tensions. An official spokesman in Jammu said that protests were held on Saturday evening in the city’s Nai Basti, Bantalab, Domana and Parade Ground areas “but the situation was quickly brought under control”. The Army has held flag marches in some areas of Jammu and heightened security at some other sensitive places to help the police and central armed forces in maintaining law and order.

Meanwhile, the JCCI has accused the state administration of failing to take effective steps to control the situation in Jammu. Manish Gupta, general secretary, JCCI, said that in view of the deteriorating law and order situation in the winter capital and no effective visible steps being taken by the administration, the trade body’s president Rakesh Gupta will announce the future course of “strict action” at a press conference on Monday.