The apex court has also categorically said that, "need-based monthly releases" have to be respected. 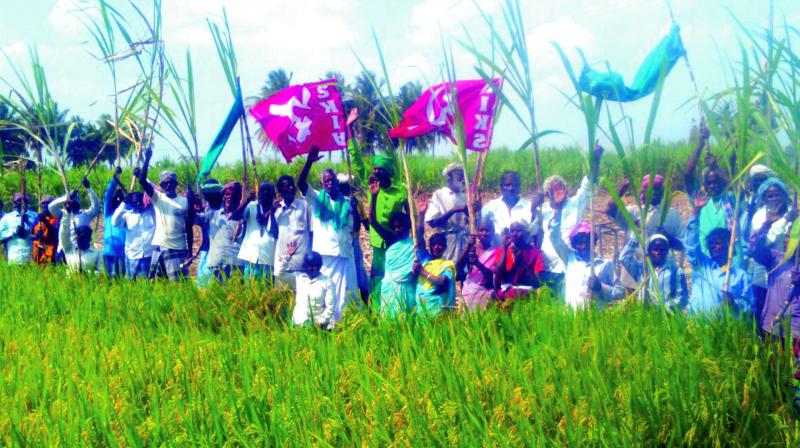 Chennai: On the face of it, the Supreme Court's Cauvery verdict may seem disappointing to lower riparian Tamil Nadu. It has to take a cut of 14.75 tmcft from the Tribunal's 2007 award of 192 tmcft that Karnataka had to deliver annually at Billigundulu upstream of Mettur reservoir.

Needless to say the Tamil political class quickly pressed the alarm bell and some, even the battle bugle. But the farmers, whose stake is deeper than even the soil they till, have taken it more pragmatically and rightly opined that what must now engage the attention of the state government is to get the Centre set up the Cauvery Management Board (CMB) within the six-week time frame set by the Supreme Court. That should ensure Karnataka delivers on the apex court award to TN.

In partly allowing Karnataka's appeal against the tribunal's 2007 final award, the court in its Friday verdict has allocated to that state an additional 14.75 tmcft of water. This includes 4.75 tmcft of water for meeting the water needs of the entire Bengaluru city, and 10 tmcft of water that the court allowed on account of "ground water availability in Tamil Nadu."

However, a quick reading of the massive 465-page judgment delivered today by the bench comprising Chief Justice Dipak Misra and Judges Amitava Roy and A N Khanwilkar, shows that it is not a battle entirely lost for Tamil Nadu. On the contrary, the verdict in its entirety could be seen as a 60-40 gain for the lower riparian state.

And but for the small, psychologically painful modification in the final apportionment of Cauvery waters, from Tamil Nadu point of view, for various reasons as pointed out in the historic judgment, the apex court has not interfered with most of the core of the final award of the Cauvery Water Disputes Tribunal (CWDT), including the final allocation shares of Kerala and Puducherry.

In fact, the biggest gain for Tamil Nadu from the Supreme Court verdict is that by implication, the Central Government can no longer duck on the issue of constituting the 'Cauvery Management Board (CMB)', the chief regulatory body for implementing the tribunal's final award, as now modified by the apex court. The judges saw "no substance" in the Centre's contention that section 6-A of the Inter-State River Water Disputes Act gave it a certain discretion in "framing a scheme" to implement the tribunal's final award. It "may" or "may not", went New Delhi's argument, but this has been firmly rejected by the Apex court.

The judges have categorically stated, "we direct that a scheme should be framed by the Central Government within a span of six weeks from today so that the authorities can see to it that the present decision which has modified the Award passed by the Tribunal, is smoothly made functional and the rights of the States as determined by us are appropriately carried out."

The apex court has also categorically said that, "need-based monthly releases" have to be respected. The Judges also made clear "no extension of time shall be granted for framing of the scheme on any ground." This by implication has made the formation of the CMB a legal necessity, an aspect that was irking the BJP-led government at the Centre, more so with Karnataka Assembly polls due shortly. Thus the judgment now turns the focus exclusively on implementing the Award.

Another significant aspect of the judgment is that Karnataka's long-pressed argument of the inherent invalidity of the 1892 and 1924 agreements, on the ground that they were unfair accords between the erstwhile British ruled Madras Presidency and former princely state of Mysuru, has also not found acceptance.

The apex court said both these agreements, which governed the sharing of the Cauvery waters, "covered areas of larger public interest which do not have any political element. In this backdrop, the agreements are neither inoperative nor completely extinct." "The issues in this case have no connection with the concept of sovereignty (in the wake of the passage of the India Independence Act in 1947 by the British Parliament) and integrity of India," the judges pointed out.

Perhaps, the only sore point that Tamil Nadu could have on this score is the Supreme Court stating that the 1924 Agreement was not meant to be permanent anyway, and that it had expired after 50 years in 1974. The lower riparian state, in underscoring the continuity of its prescriptive rights to protect its existing irrigation areas in the Cauvery delta, had been harping that only "certain clauses" of the 1924 Agreement were due for review in 1974, and that the long failure of talks on both sides had led to the formation of the tribunal.

But even this shaking distress has been more than offset by the Supreme Court agreeing with the Tribunal in applying the internationally accepted norms for equitable distribution of inter-state river waters beginning with the Helsinki Rules. And the biggest gain in upholding the spirit of the Helsinki Rules is that "no single state can claim exclusive ownership of its waters."

This heavy statement of raw truth should unsettle the rabble-rousers in the upper riparian state who have all along been behaving as though they are the lords of Cauvery and would only open a little tap at Billigundulu when their own KRS dam filled up a bit too much in good monsoon. Fortunately, this is not happening as we see only sweets being distributed while the political heavyweights, the Chief Minister included, have chosen not to rush to the TV mikes with belligerent statements demonstrating vote-bank politics, yet again. They have not closed the doors on this easy option, either, saying for now that they need time to study the huge SC verdict; but one must hope they would refrain from continuing with the divisive politics of local jingoists. The sober elements, of whom there must be many in mainstream parties in Karnataka, can now take refuge under the Supreme Court order and let go 177.25 tmcft down to TN.

While the governments in the Cauvery states-Karnataka, Tamil Nadu, Kerala and Puducherry-and the BJP regime at the Centre must brook no delay in setting in motion the implementation of the Supreme Court order in letter and spirit, what the farmers in the region must now attempt is to revive the confederation of their associations that was, for sometime a few years ago, trying to resolve the Cauvery dispute by holding cordial discussions to work out a give-and-take formula that helped all and hurt none. It's common knowledge that their politicians did not allow them to succeed but now this SC verdict revives the hopes that they could win.