Kartik was dispatched to Patna zoo while the second child Rakhi, a female, is now living with her. 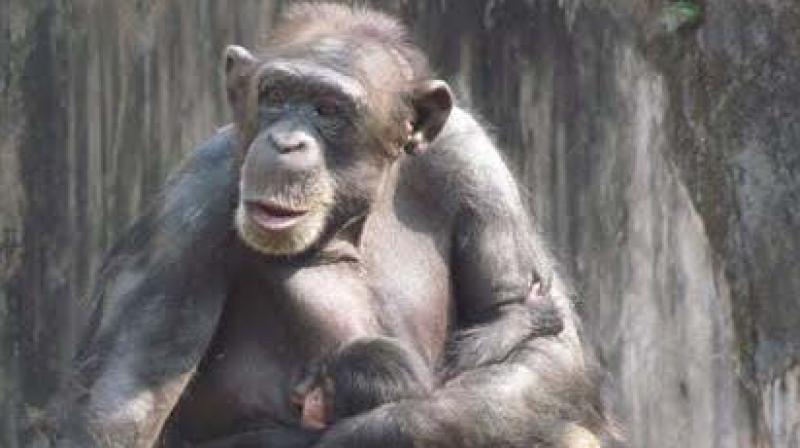 Bhubaneswar: Officials of Nandankanan Zoo on the outskirts of Odisha’s capital Bhubaneswar are preparing to welcome a new guest among themselves on March 23 when Purnima, a 16-year-old female chimpanzee, will give birth to her third child. Zoo doctors are taking every care of Purnima to ensure the safe delivery of her child.

The zoo authorities have separated Purnima from her parents — mother Pampeta and father Julu — fearing that Julu might harm the newborn. Purnima’s first child Kartik, a male, was born on 2010.

Kartik was dispatched to Patna zoo while the second child Rakhi, a female, is now living with her.

Prior to her separation, Purnima and her child Rakhi were living with Pampeta and Julu in Enclosure No. 60.

“A team of doctors are regularly tracking the everyday mood and movement of Purnima. Special arrangements have been made for her in separate enclosure. Apart from giving her nutritional food required for an expectant mother, we have erected special bed for her sound sleep,” said Anjan Kumar Mohanty, range officer, Nandankanan.

The zoo authorities are focusing on Purnima as the newborn will be a prized possession for them given the fact that they have only four chimpanzees now.

Pampeta and Julu were brought from Singapore Zoo in 1994 under a mutual exchange programme. Since Julu has fathered all the three children of Purnima, his daughter, the zoo authorities apprehensive that her children might not live for longer a period because of the same blood group.

Sources said the zoo authorities are contemplating to exchange Purnima’s daughter Rakhi for a female chimpanzee from some other zoo in the country to maintain a separate lineage.

The Nandankanan zoo, one of the prominent zoos in the country, has about 1,600 animals.