The dalit leader, who has been ordered not to be in Delhi till the Assembly polls in February, began his day by visiting Jama Masjid on Friday. 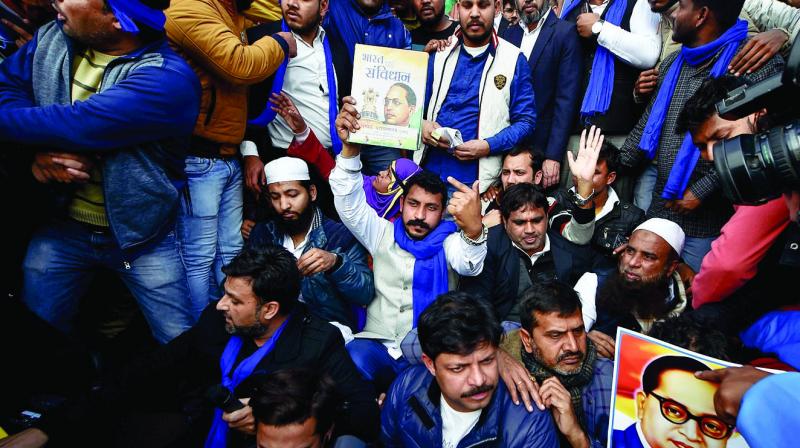 Bhim Army chief Chandrasekhar Azad holds a copy of the Constitution during a protest against the CAA at Jama Masjid in Old Delhi on Friday. (Photo: PTI)

New Delhi: Just a day after he was released, Bhim Army chief Chandrashekhar Azad on Friday said he would continue his fight against the CAA and NRC and questioned the BJP’s claim that the Citizenship (Amendment) Act will help persecuted dalits from Pakistan, Afghanistan and Bangladesh.

Mr Azad, who was arrested for his anti-CAA protests in the capital and sent to judicial custody on December 21, said if the BJP was so concerned about the dalits then why was the condition of dalits in India deteriorating day by day.

The dalit leader, who has been ordered not to be in Delhi till the Assembly polls in February, began his day by visiting Jama Masjid on Friday. Flanked by his supporters and locals, Mr Azad read the Preamble to the Constitution.

Later, addressing media persons at the Indian Women’s Press Corps, he accused the BJP of using NRC and CAA to divide the country now that the Ram Temple issue is over.

Mr Azad, who had declared that he would soon enter politics, deflected questions on BSP chief Mayawati.

“Country is bigger than politics. BSP or Mayawati should not be the question anymore,” he said.

Asked about his political debut, he said, “When I was in Lucknow, we were working on entering electoral politics. But then this (CAA/NRC) came. I thought that first I should be saving the country. Even in jail, I was educating people on CAA”.

He also blamed the Opposition parties, saying they have failed to fulfill their responsibility. “So now it is up to the common people to protest against the government”.

The Bhim Army chief was arrested in connection with the violence during an anti-CAA protest in Old Delhi’s Daryaganj where he was reading parts of the Constitution.

Mr Azad’s outfit had organised a march from Jama Masjid to Jantar Mantar against the amended Citizenship Act on December 20, without police permission.

On Wednesday, while granting him bail, a Delhi court restrained him from visiting Delhi for four weeks and directed him not to hold any dharna till elections in the national capital are over.