The stay at the resort would probably be a one-day affair, as 'a show of strength', Congress leader said. 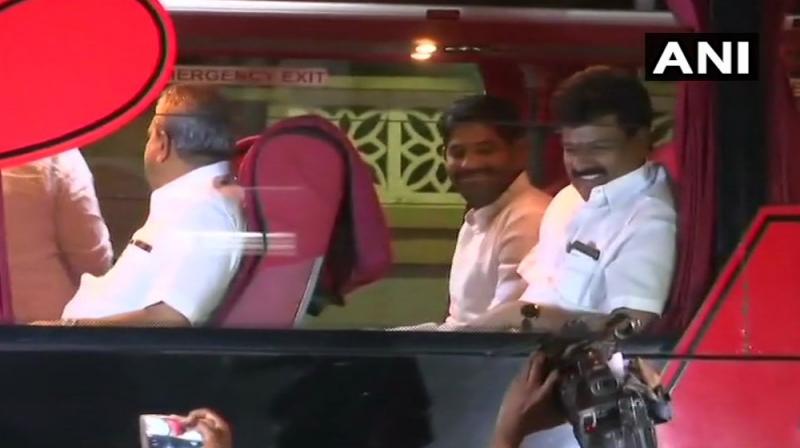 Congress MLA Sowmya Reddy said, 'We are working together well. Let us work. We are all going to Eagleton resort.' (Photo:Twitter | ANI)

Bengaluru: Four Karnataka Congress MLAs on Friday abstained from a meeting of the Legislature Party in which the party decided to move rest of the 76 legislators to a resort to prevent poaching.

The meeting was convened by the party to assess whether its flock was intact amid speculation that some of the MLAs had switched over to the BJP.

The party, which had threatened to invoke anti-defection law against those absenting themselves, decided to issue show cause notices to those who did not make to the meeting.

Congress leader Siddaramaiah, who chaired the CLP meeting said: "76 MLAs were present physically. I will send notice to absentees and seek an explanation. Then I will speak to the high command."

Congress MLA Sowmya Reddy said, "We are working together well. Let us work. We are all going to Eagleton resort."

The stay at the resort would probably be a one-day affair, as "a show of strength", Reddy said, adding "We will also have discussion on upcoming parliamentary elections."

"They approached our MLAs with huge offers of Rs 50-70 crores. I have proof. How come a chowkidar (guard) has so much money?" asked Siddaramaiah, apparently referring to the Prime Minister who calls himself a "chowkidar".

The Congress, which shares power with JD(S), has 80 MLAs in the 224-member Assembly, including the Speaker. Accordingly, 79 MLAs were expected to attend the CLP meeting held under the supervision of central leaders K C Venugopal and Mallikarjun Kharge.

Those absent were Nagendra B, Ramesh Jarakiholi, Umesh Jadhav and Mahesh Kumtalli, the party sources said.

Ramesh Jarkiholi, who was dropped as minister in the recent cabinet rejig, is said to be extremely unhappy over it.

Siddaramaiah said Jadhav had written saying he would not be able to attend the meet as he was unwell, while Nagendra had spoken to AICC general secretary K C Venugopal conveying his inability to attend because of a court case.

The other two MLAs had not communicated anything, he said.