The court was hearing pleas of two women in their 40s, Bindu and Kanakadurga, who entered Sabarimala shrine on Jan 2. 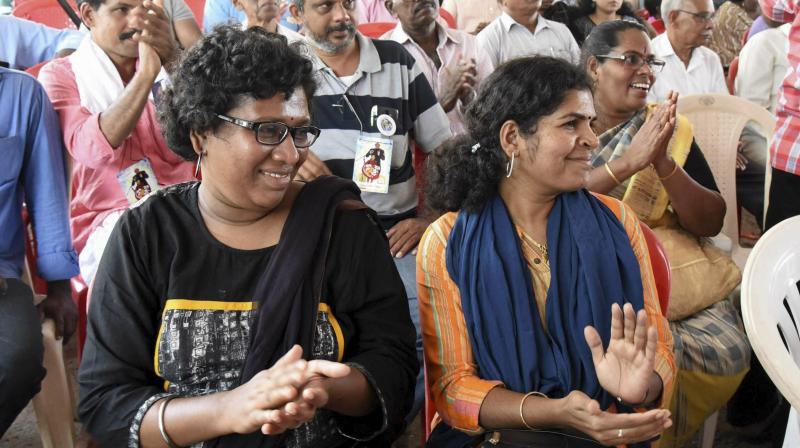 New Delhi: The Kerala government on Friday told the Supreme Court that more than 50 women have entered the Sabarimala shrine since the apex court turned down the age-old practice of denying entry to women of menstruating age.

The top court was hearing the petitions of two women in their 40s -- Bindu and Kanakadurga – who had entered the Sabarimala shrine earlier this month.

Senior advocate Vijay Hansaria, appearing for the state government, submitted a note stating that till now 51 female devotees, between the ages of 10 and 50 years, have entered the Lord Ayappa shrine of Lord Ayappa.

However, advocate Mathews J Nedumpara appearing for some petitioners, who have filed a review plea challenging the decision of the top court to allow women of all ages to enter the temple, said that none of the female devotees has entered the shrine.

The two women, Bindu, a college lecturer and CPI(ML) activist from Kozhikode district's Koyilandy, and Kanakadurga, a civil supplies department employee from Angadipuram in Malappuram, who visited the shrine on January 2, sought protection following threats.

Kanaka Durga was allegedly attacked by her mother-in-law on Tuesday on her return and was admitted in the hospital. The Supreme Court today directed the Kerala Police to provide round-the-clock security to the two women.

The plea had also sought directions declaring all authorities not to conduct the rite of purification or to shut the temple if any woman of the banned age group enters the temple. It had said that the purification ritual is representative of a cleansing ceremony, signifying the petitioners were impure, which is violative of their dignity under Article 21 of the Constitution.