Out of 80 MLAs, four -- Nagendra B, Ramesh Jarakiholi, Umesh Jadhav and Mahesh Kumtalli -- did not turn up for CLP meet. 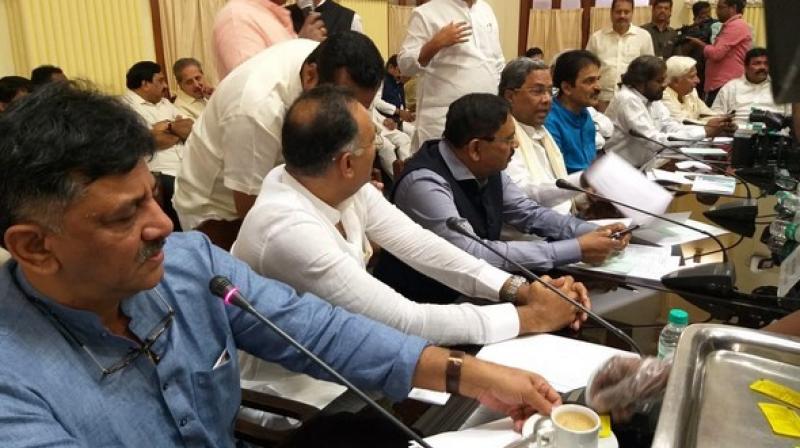 Ahead of the meeting, the Congress MLAs were warned that those abstaining will be expelled from the party under anti-defection law. (Photo: ANI)

Bengaluru: Four Karnataka Congress MLAs did not turn up for the meeting of the Legislature Party in Bengaluru on Friday which was convened to assess whether its flock was intact amid speculation of defections.

The Congress, which shares power with JD(S), has 80 MLAs in the 224-member Assembly, including the Speaker.

Accordingly, 79 MLAs were expected to attend the CLP meeting but only 76 turned up for the meeting held under the supervision of central leaders K C Venugopal and Mallikarjun Kharge.

Those absent were Nagendra B, Ramesh Jarakiholi, Umesh Jadhav and Mahesh Kumtalli, the party sources said.

Ahead of the meeting, the Congress MLAs were warned that those abstaining will be expelled from the party under anti-defection law.

The Congress had said it has called the meeting of its legislators to take stock of the prevailing political situation.

"If somebody doesn't attend this (CLP) meeting, action will be taken against them under the anti-defection law. Also, it will be assumed that the member himself has decided to leave primary membership of the party," senior party leader and former chief minister Siddaramaiah said on Wednesday.

The Congress' alliance partner JD(S) has 37 seats and its supporter BSP has one. The BJP is the single largest party with 104 seats but 9 short of the simple majority mark.

The meeting was called amidst allegations that the BJP was poaching on the Congress MLAs.

The BJP has been denying this allegation and in turn claimed that its MLAs were being poached upon by the Congress.

The charges of horse-trading were triggered after three Congress MLAs visited Mumbai earlier on Monday, reportedly along with some BJP MLAs.