Karni Sena chief in Ujjain appeals social organisations to make sure that 'Padmaavat' is not shown in cinema halls. 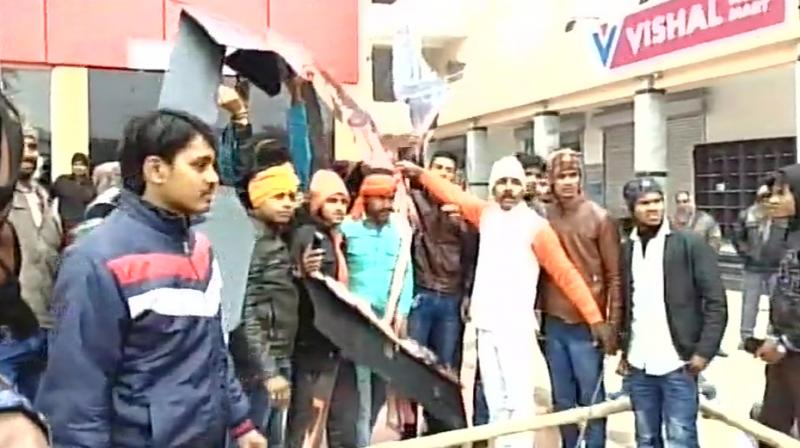 Hours after Lokendra Singh’s comment, reports came from Bihar's Muzaffarnagar that some people, who identified themselves as members of the local Karni Sena unit, vandalised a cinema hall. (Photo: Twitter | ANI)

Mumbai: Despite the Supreme Court’s order restricting states from issuing notifications and orders prohibiting exhibition of the Sanjay Leela Bhansali film ‘Padmaavat’, Karni Sena, the fringe group that has been at the forefront has refused to back off.

Rajput Karni Sena chief at Ujjain in Madhya Pradesh, Lokendra Singh, appealed social organisations across the country to make sure that the movie (Padmaavat) is not shown in cinema halls.

"I appeal to social organisations across the entire country, Padmavati nahi chalni chahiye. Film hall par janata curfew laga de (The movie should not shown. Public should enforce a curfew at cinema halls),” Lokendra Singh declared soon after the apex court ticked off four state governments ruled by the BJP for refusing to screen the film.

Hours after Lokendra Singh’s comment, reports came from Bihar's Muzaffarnagar that some people, who identified themselves as members of the local Karni Sena unit, vandalised a cinema hall.

Reiterating their demand for banning its release, a protester from the Chhattisgarh Rajput community said, ''Ye antim chetaawni hai usko iss baar khamiyaza bhugatna padega. Maharani Padmavati hamari aan baan shaan ki pratik hai aur agar Chhattisgarh mein film laga to iska khamiaza bhugatna padega. Jahan Padmaavat chalega wo cinema ghar jalega. (This is our last warning. We won't allow anyone to play with the dignity of Queen Padmavati, whom we hold with highest regard. All those cinema halls, which will screen the movie, will be set ablaze.)"

The movie - which stars Deepika Padukone, Ranveer Singh, Shahid Kapoor in leading roles - has been beset by trouble since the shooting commenced.

The sets of the film were vandalised twice - in Rajasthan's Jaipur and Maharashtra's Kolhapur.

The film was slated to release in December 2017, but will now hit the big screens on January 25.

In December, the censor board had decided to give Sanjay Leela Bhansali's Padmavati a UA certificate without any cuts but has suggested that the director change the film's title to 'Padmaavat' besides making four other modifications.

After the Central Board of Film Certification (CBFC) cleared the film with some changes including its name - it was initially called ‘Padmavati’ - Rajasthan, Gujarat, Haryana and Madhya Pradesh governments barred cinema halls from screening the 190-crore film before its release.