A few women, in their 60s, almost limped to the protest site in Delhi, while some accompanied their family members and classmates. 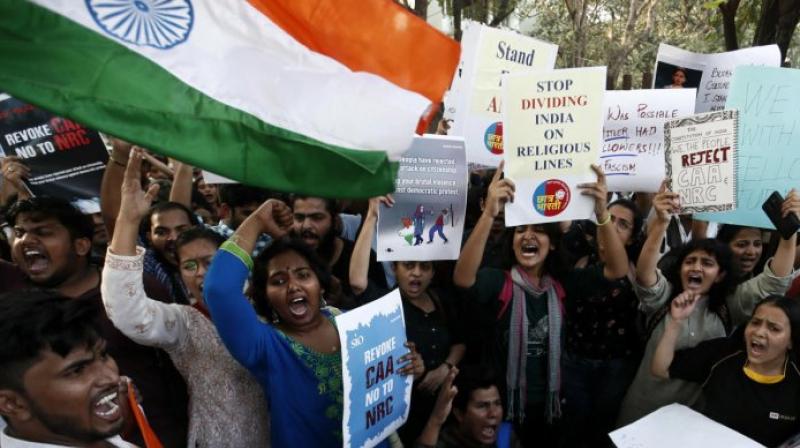 A group of another 50 women, including students and their family members, demanded that Union Home Minister Amit Shah resign in the wake of alleged police atrocities. (Photo: PTI)

New Delhi: Women from all age groups, including grandmothers and sisters of Jamia Millia Islamia students, took the lead in the protest on Monday against the alleged police excesses and the amended Citizenship Act, vowing to continue the fight for justice till their "last breath".

A few women, in their 60s, almost limped to the protest site in Delhi, while some accompanied their family members and classmates. Ayesha Renna and Ladeeda Farzana, who have become the face of the Jamia protest after a video showing them standing up to the baton-wielding police personnel went viral, told reporters that the protest was a "fight to protect our existence" and that they fear no one but God.

"CAA and NRC are a direct attack on Muslims. Today, it's us. Tomorrow, it will be the entire country," the two women from Kerala said. Renna, an MA History student, and Farzana, an Arabic student, were seen in a video protecting a colleague from the police as the Jamia Millia Islamia had turned into a battlefield on Sunday, with police entering the campus and using force following violent protests against the controversial Citizenship Act. Aamna Asif, 21, a student of Economic Honours, said she was supposed to leave for home in the winter break, but now, she would not. "Back home in Lucknow, my father is really worried, but my mother told me to keep the will to die and that we are all fighting for a cause," Asif said.

"I will stay put here till we win this battle." "They hounded us in our bathrooms, libraries and mosques," the student said as narrated the ordeal. "When policemen entered the library, some women rushed to its first and second floor, switched the lights and hid behind the furniture and in the corners," Asif said.

"The policemen pulled them out from there too. This is how we are protecting our daughters." A group of another 50 women, including students and their family members, demanded that Union Home Minister Amit Shah resign in the wake of alleged police atrocities.

Nadia Khan, an alumna of the university, said each drop of our blood was for Jamia. "I appeal to all my sisters who studied in Jamia or are currently part of it, please come out and fight for Jamia," she said. The protesting women also included grandmothers, mothers and sisters of Jamia students. Shaheen Kausar, 52, who led the group of women to the protest site, said students were "dragged, pushed, kicked and caned". "It is not only about my children. This is about all those who have come here leaving their families behind," Kausar said.

"These students have come from all corners of our country. All are our children." "Women proved their strength in every era. We will do that again. Won't leave the streets till the amendments in the citizenship act are withdrawn," Kausar said. A woman student, who did not wish to be identified, said her name is not important, but her my voice is, adding that they are not going to back out. "Our sisters and brothers were pulled by their hair and dragged on streets. Their clothes were torn and they were left for the dead," she alleged.

"This is not Palestine. We won't give up until Amit Shah resigns." The women held up bangles and asked Delhi Police to wear them. Two sisters -- Ameena Nomgbri (39), a housewife, and Naseem Nomgbri (35) from Shillong -- said they could not stop themselves from coming out on the streets.

"The Northeast is burning and flames have reached Delhi. The CAA has to go or the country will break into pieces," Ameena Nomgbri said. "Have never witnessed such vicious political atmosphere. Students, teachers, common people -- everyone's being targeted," Naseem Nomgbri said. "We need to fight to keep the country together. This is now or never."