The Chief Justice of India SA Bobde said: 'We do not have to intervene. It is a law and order problem.' 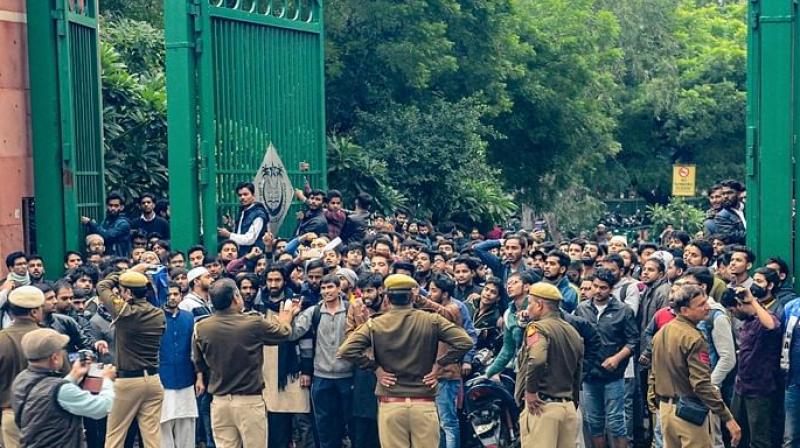 The students were protesting against the government’s Citizenship Amendment Act, 2019, which gives citizenship to migrants, of six non-Muslim minority communities from three countries, Pakistan, Bangladesh, and Afghanistan. (Photo: PTI)

New Delhi: The Supreme Court on Tuesday redirected petitions on the Citizenship Act protests to respective high courts, where the incidents of violence have occurred and said that they could set up enquiry panels. The apex court also said high courts should be approached first on pleas.

A bench headed by Chief Justice S A Bobde was hearing pleas including that of Alumni Association Jamia Millia Islamia University and said: “We do not have to intervene. It is a law and order problem, how did the buses burn? Why don’t you approach jurisdictional High Court?”

Taking note of the allegations and counter-allegations, the bench also comprising justices B R Gavai and Surya Kant said: "Regarding the nature of the dispute and the incidents that have occurred we find it appropriate to appoint single committee in each state to collect the material for fact finding and we therefore consider this appropriate to direct the petitioners to approach the high courts of jurisdiction of incidents said to have occurred."

The bench clarified that it was needless to say that "high court will be at liberty to pass appropriate order with regard to arrest and medical treatment if brought to its notice after verification".

The bench noted that serious grievance has been raised by the petitioners that Vice Chancellors of the Universities were being ignored by police while taking action against the students.

The students were protesting against the government’s Citizenship Amendment Act, 2019, which gives citizenship to migrants, of six non-Muslim minority communities from three countries, Pakistan, Bangladesh, and Afghanistan.