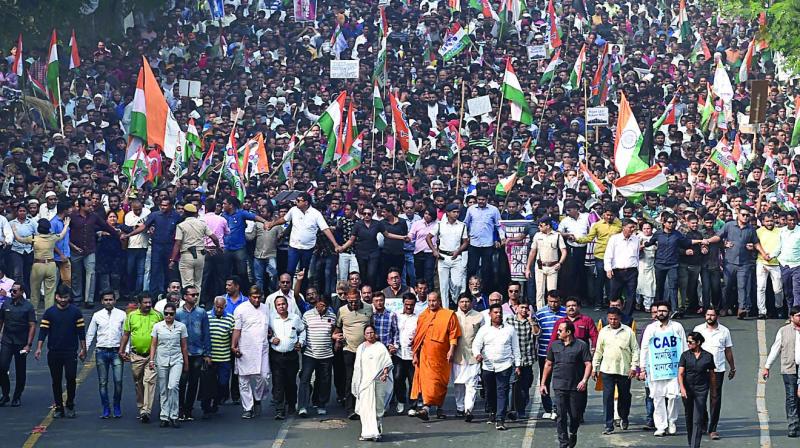 West Bengal chief minister Mamata Banerjee leads a rally in Kolkata on Monday along with thousands of supporters and vowed not to allow the proposed country-wide NRC and the amended Citizenship Act in West Bengal. (Photo: PTI)

New Delhi: Anger over the Citizenship (Amendment) Act and Sunday’s brutal police action on students of Jamia Millia Islamia and Aligarh Muslim University who were protesting against the divisive nature of the legislation spread to various campuses and towns across India on Monday.

Even as protests resumed at Delhi’s Jamia university on Monday morning, despite violent clashes on Sunday which resulted in 35 students being detained and 125 injured, students at various campuses across the country boycotted exams and classes to protest police high-handedness and express solidarity with the students of Jamia and AMU. Many student bodies also called for marches and sit-in protests on Tuesday and Wednesday.

While large demonstrations against CAA took place in Delhi, Mumbai, Hyderabad and Kolkata, students from three Indian Institutes of Technology (IITs) — IIT Kanpur, IIT Madras and IIT Bombay — and IIM Ahmedabad joined the chorus against police crackdown on Jamia and AMU students. As did students in Hyderabad, Varanasi, Kolkata, Puducherry, Patna, Kanpur, Benaras, Bengaluru, Lucknow and Mumbai. They all raised their voices and held up banners against the alleged brutal police assault on students.

IITs, IIMs and other premier institutions do not usually join political protests.

Students from Delhi University and Jawaharlal Nehru University had also protested in large numbers on Monday.

In Mumbai, students from the Tata Institute of Social Sciences took out a candlelight march and sang the famous Urdu poem, Sarfaroshi ki Tamanna, a popular slogan associated with revolutionaries like Bhagat Singh. Though peaceful, this protest was also observed against the controversial CAA, which was passed last week by the government.

IIT Bombay also joined the protests as its students hit the streets with torches and placards expressing solidarity with Jamia students. Students from the prestigious Indian Institute of Management (IIM) Ahmedabad took out a march in solidarity with students of Jamia Millia Islamia and Aligarh Muslim University.

Students of IIT Madras and the Puducherry University protested against the “high-handedness” of the police. Students of Guwahati University and Dibrugarh University pledged their support for the students of Jamia.

A heavy police force guarded the gates of the Islamic seminary Nadwatul Ulama in Lucknow as a large number of students held a demonstration and tried to take to the streets. However, police prevented them from coming out.

Protests by Patna Univeristy student also saw clashes with the police. Over 100 students of the Indian Institute of Management Bangalore wrote to Prime Minister Narendra Modi on Monday, protesting against the police crackdown on students.

Protests against the Citizenship (Amandment) Act, which began in Assam on Thursday, have since spread to other parts of India.

While some protesters say the law is anti-Muslim and against the secular ethos and spirit of the Constitution, others — especially in border regions — fear large-scale migration.

Authorities have tried to curb protests by shutting down Internet services, and firing tear gas shells and lathi-charging crowds.

On Sunday, a march by students of Jamia University in Delhi ended with at least three buses and several motorbikes being torched, roads blocked and stones being thrown at police officials, who responded with tear gas.

The university said police later entered the campus without permission and videos shot by students showed police beating up students inside campus areas like bathrooms and the library.

The police have been heavily criticised, with many on social media alleging that officers attacked students with sticks and tear gas when they were peacefully protesting.

The police said they did what was “necessary” to stop the protests.