Those killed include 253 militants, 97 securitymen and 84 civilians; 500 died in militancy-related violence in 2008. 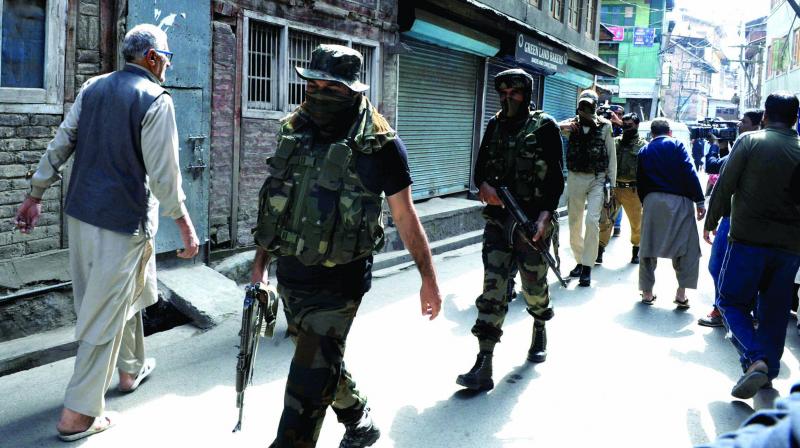 Security personnel pass through a colony after an operation in Srinagar

Srinagar: As many as 435 people have been killed in violence in Jammu and Kashmir, so far, this year and the mayhem continues. The officials said that 2018 has been bloodiest year for the State since 2008 when over five hundred people had died in militancy-related violence. The toll stood at 384 in 2017 whereas 247 people had died in 2016.

Those slain, so far, in 2018 include 253 militants, 97 security personnel and 84 civilians. The killing of so many militants is being seen as a ‘victory’ and ‘major breakthrough’ by the security forces in their tough counterinsurgency campaign. “We have been able to carry out some of the spectacular operations against militants in past few weeks which resulted into the killing of large number of them including some top commanders. This would decrease the graph of militancy particularly in south Kashmir,” said Director General of Police, Dilbag Singh.

The security forces comprising the Army, counterinsurgency Special Operations Group (SOG) of the J&K police and central armed forces-mainly Central Reserve Police Force (CRPF)-have stepped up military operations against militants across the Kashmir Valley. They are being actively assisted by various secret agencies and their own respective intelligence wings in the anti-militancy operations, mainly by providing keeping track on the militants’ movement and then proving “credible and timely” inputs to facilitate quick and handy operations against them.

It was due to “greater synergy” among various security forces and agencies and “better and specific intelligence inputs” about the movement of militants that led to “elimination” of nearly seventy of them including a dozen top commanders in the security operations in October and November alone, said the police chief endorsing a similar statement made by a senior Army commander earlier.

The DGP noted with ‘great satisfaction’ that no fresh recruitment of local youth into the militant ranks is taking place. “We have not received any such information that some new boy has joined the militants’ ranks during the past two months. People are cooperating with us. The militant commanders will continue to remain our target and we shall continue to try to carryout good operations against them and their cadres,” Mr. Singh said.

But if independent reports emanating from various parts of the Valley particularly south Kashmir are to be believed there seems to be no end in militant recruitment although the intensity is not as high as witnessed following the killing of popular Hizb commander Burhan Wani in July 2016.

At last weekend, Srinagar suburb witnessed an 18-hour-long fierce gun battle between a group of LeT militants and security forces. Among the three slain was a 14-year-old boy Mudassir Rashid who had joined the militants’ ranks only about a week ago. With him also died his friend and neighbour Saqib Bilal Sheikh, 17, who had done a brief role in Bollywood movie Haider and their Pakistani superior Ali Bhai.

The killing of the friend-duo from the valley’s Hajin area was seen by local watchers as a grim reminder of the Kashmiri youth being continuously lured by the gun. They say the trend calls for political engagement with the people of the Valley, the need stressed upon also by the Army’s Northern Command chief Lieutenant General AK Bhatt. He said in a recent interview that the Army and other security forces can only create conditions of normalcy and “beyond that, the initiatives have to be at levels of good governance and politically talking to people”. He said such political engagement was witnessed during the Atal Bihari Vajpayee government and that similar initiatives need to be taken to address the issue.

Muhammad Yousuf Tarigami, the CPIM’s credible Kashmir face agrees. He said, “It is our firm belief that gun is no answer to the imbroglio we do face in Jammu and Kashmir. The counter gun can’t do any good either. The only option and way forward is to initiate dialogue with the stakeholders. You also need to mitigate the miseries of the people.”

Local resident Nazir Ahmed Mir said the key to resolve the crisis is to “end the atrocities on the youth of Kashmir and embrace them as your own flesh and blood”. He said, “We don’t want anyone should die be it a militant, a soldier or a civilian. We want peace but that should not be the peace of graveyard”.

Lt. Gen. Bhatt called for working in the “psychological space” with the populace of Kashmir. He wants them to be told that their future is far better in India than in Pakistan and that they are only being used as tools by the separatists and Pakistan which he termed as long-term solutions.