Modi said that the wave for change, which began with the Assam elections, is now reaching Meghalaya. 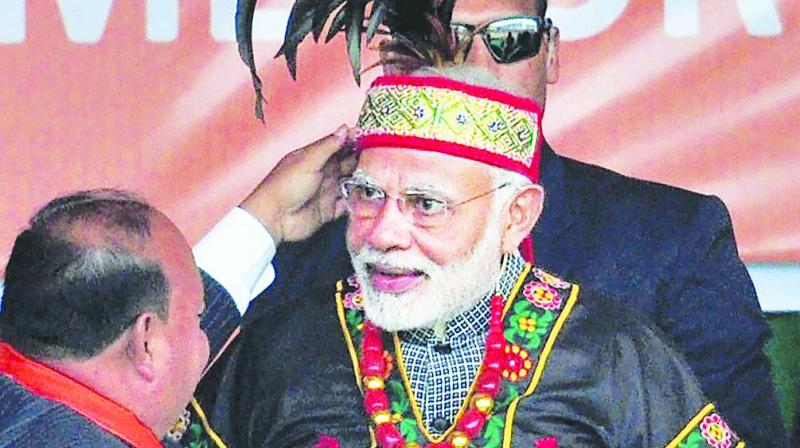 Prime Minister Narendra Modi being felicitated with a Garo tribe headgear during a rally at Jawaharlal Nehru Stadium, in Shillong. (Photo: PTI)

Guwahati: Prime Minister Narendra Modi who on Saturday inaugurated the Shillong-Nongstoin-Rongjeng-Tura Road in Shillong, kicked off the election campaign of the party for the assembly elections in Meghalaya next year.

Addressing a huge public rally at Polo Ground in Shillong, Mr Modi said that the wave for change, which began with the Assam elections, is now reaching Meghalaya. “This state can do wonders. 15 years of Congress rule has ruined Meghalaya,” said the Prime Minister while asking, “The CM of Meghalaya is a doctor but what is the state of the health sector in the state. Why are people not getting proper healthcare?”

Mr Modi also regretted the delay in construction of 261 km long 2-Laning of Shillong-Nongstoin Section of NH 106 and Nongstoin- Rongjeng Section of NH 127-B. Pointing out that this road will serve as an east-west corridor of the frontier state, Mr Modi said, “It will boost economic activity and establish a direct link between the important towns of the state- Shillong and Tura. The travel time between the two important towns of the state will be reduced to half.”

Asserting that central government has sanctioned whopping Rs. 32000 croe for construction of new highways across the northeastern states, Mr Modi said that the motto of his government is transformation through transportation.

Pointing out that central government had formed North East Council for development of the region in 1972 but it was not taken seriously, the Prime Minister said, “

The prime minister also spoke about how he has instructed his ministers to interact with the people of the northeast and at least one of them must visit the region every 15 days.

Asserting that his government is committed to accelerate the pace of development in the northeast he said that central government has also started massive work on linking the northeastern states on rail and air link. He reminded, “You know better the the attitude of the previous governments towards northeast.”

Northeast can become a carbon negative zone
Prime Minister Narendra Modi who was on a daylong visit of Mizoram on Saturday said that Northeastern states have potential to become the carbon negative zone of India which may convert it into a global destination for tourists.

Mr Modi who inaugurated the 60MW Tuirial hydropower project and addressed a public rally at Aizawl said that besides power generation, the project, which makes Mizoram power surplus state in the region after Tripura and Sikkim would also boost water navigation, pisciculture, tourism and water supply. The Prime Minister, however, regreted the delay in the project.