Mother Sonia will contest 2019 polls from Rae Bareli, not me: Priyanka Vadra

The Congress, however, clarified that Sonia Gandhi was only retiring as Congress president and not from active politics. 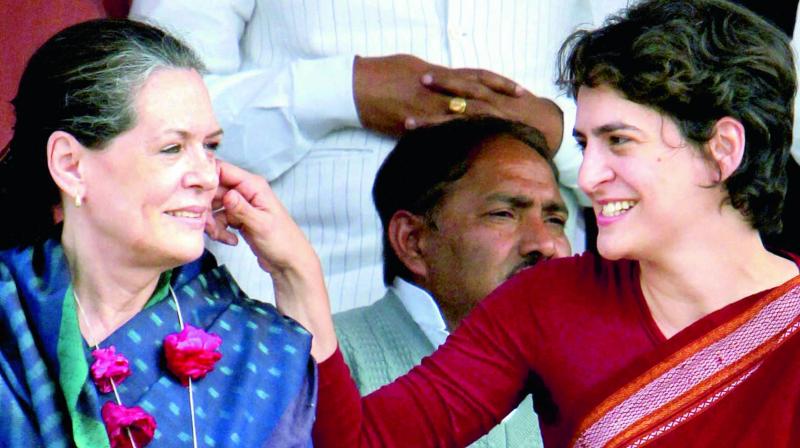 The response came after the media speculated that Priyanka Gandhi-Vadra would assume an active role in politics to assist her brother, Rahul Gandhi. (Photo: File)

New Delhi: Ending speculation that she was ready to take over her mother’s constituency, Priyanka Gandhi Vadra on Saturday said her mother, Mrs Sonia Gandhi, would contest the 2019 Lok Sabha polls from Rae Bareli.

“There is no question of me contesting the 2019 polls. My mother will contest from Rae Bareli,” Ms Priyanka Gandhi Vadra told reporters on the sidelines of the function of her brother taking over as the new Congress president.

Speculation began on Friday when Mrs Gandhi indicated that now her “role was to retire”. The Congress, however, clarified that Mrs Gandhi was only retiring as Congress president and not from active politics.

Speaking about Mrs Gandhi, Ms Vadra said that her mother is the “bravest” woman for overcoming huge difficulties during her record 19-year tenure as the Congress chief.

Ms Vadra looks after the parliamentary constituencies of her brother and mother, Amethi and Rae Barielly respectively.

There have been murmurs that when Mrs Gandhi retires, Mr Gandhi would move to her constituency of Rae Barielly while Ms Vadra would go to Amethi. However all this speculation was dismissed on Saturday.

Over the last one year, Ms Vadra has become more and more involved in political activity. In the Uttar Pradesh Assembly elections, which concluded early this year, Ms Vadra played a key role. She also played an important role in sewing up the alliance with the Samajwadi Party.

Leaders and workers of Uttar Pradesh Congress have long been demanding that Ms Vadra join active politics and contest elections from the state. However, till now, she has kept herself confined to Amethi and Rae Barielly constituencies.