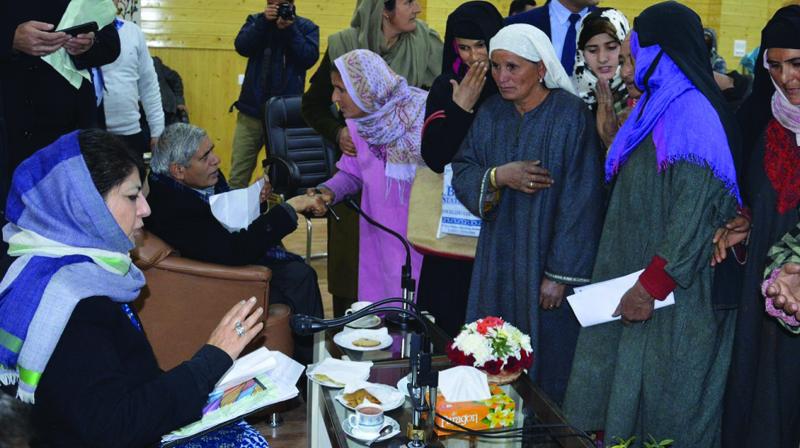 Consequently, her public image which had slumped to a new low, first by her re-picking the BJP as her party PDP's ally and then in the aftermath of post-Burhan Wani killing turmoil last year, seems to be getting better.

For the past few weeks, she has been touring the state to reconnect with people and the results are "encouraging" for her and the PDP, claim party sources.

Ms Mufti took over as J&K's first woman chief minister on April 4, 2016, nearly three months after her father and the then-incumbent Mufti Muhammad Sayeed died in a Delhi hospital.

Her assuming office with BJP's help had evoked criticism not only from her political detractors but few dissenting voices were heard within her own party too. The derision was not over Ms Mufti stepping into her father's shoes but choosing ideologically-divergent BJP as her ally.

The chief minister recently visited almost all the 10 districts of Kashmir valley to know and try to address the problems of the people. As a follow, she, either herself or through various ministers and heads of departments, got dozens of implementation orders issued over the past two weeks, the sources claimed.

In the Chenab valley of the Jammu region, she spent three days and acted upon complaints during her "public redressal camps" held in the district headquarters of Doda and Kishtwar.

Terming these as "one of the longest public interactions in decades," the sources said one such camp started at 10.30 am and ended at 1.40 am on the next day. The on-the-spot decisions she took included releasing funds for improving public service facilities besides addressing other collective and individual issues of residents.

Chief secretary B.B. Vyas on December 10 directed all the DCs "to implement the commitments in letter and spirit made by the chief minister during her public outreach across various districts".

He also issued directions for preparing weekly progress reports for monitoring by divisional commissioners at Srinagar and Jammu.

The effort, in turn, is helping the chief minister not only to reconnect with the people but also improve her image after going through bad times.

"People at large scale and almost every day share their challenges with the chief minister. They find in her a forthcoming and courteous lady," said an official.

"It is true that her public outreach is helping her in reviving her public image," he added.

Some local watchers, however, say that the public response to the outreach effort may not necessarily be an endorsement of her political priorities. "People have many problems and anyone who addresses these turns a messiah for them," said Feroz Ahmed, a political commentator.

Earlier, Ms Mufti had invited criticism for joining hands with the BJP. She faced scorn from the Opposition National Conference (NC) and the separatists alike for rapprochement with an "anti-Muslim and anti-Kashmiri" party for her "lust for power."

There were signs of discontent within the PDP as well. Her one-time lieutenant and former minister Tariq Hamid Karra revolted and accused the BJP of not respecting the  common minimum programme reached between the two sides for government formation in 2015 and termed the PDP-BJP coalition as a "failed experiment".

But after Mr Karra quit the PDP and the Srinagar seat of Lok Sabha no major upheaval was witnessed within the PDP. Party insiders said that it was Ms Mufti's "inspirational motivation" that silenced all voices of dissent.

But the worst was in store for her. The killing of militant commander Burhan Muzaffar Wani on July 8, 2016, pushed J&K into most terrible times in recent history. The unrest which continued for about six months left over eighty people dead and thousands others injured besides causing widespread destruction and dangerously helping the militants to swell their ranks.

As a consequence, Ms Mufti's standing, both as the chief minister and a politician, slumped to a new low. Her concerted efforts spread over months to recover and improve did not yield any encouraging results for her.

Earlier, after her father's death Ms Mufti was "reluctant" to form the state government with the BJP.  She publicly asked for J&K-specific confidence-building-measures (CBMs) towards creating congenial atmosphere for her to take over as the chief minister. In view of the delay in government formation, J&K remained under the governor's rule for nearly three months from January 8 last year.

However, joint efforts of PDP and BJP negotiators paved the way for a broader reconciliation meeting between Ms Mufti and BJP president Amit Shah in the last week of March 2016. Subsequently, she was invited by Prime Minister Narendra Modi for a one-on-one meeting as an affirmation of mutual understanding, ending the deadlock over government formation in Jammu and Kashmir after several months of governor’s rule.

Ms Mufti had described her 30-minute-long meeting with Mr Modi as "very positive" and "good" in addressing issues pertaining to the state's people.

However, the BJP quickly chose to charm its core constituency both within and outside Jammu and Kashmir and, at the same time, put Ms Mufti and the PDP in an uncomfortable situation.

Its national general secretary Ram Madhav said that the saffron party had not accepted any new conditions from its alliance partner.