The BJP spokesperson said it was an irony that despite the Congress not being in power for four years, corruption cases were still tumbling out. 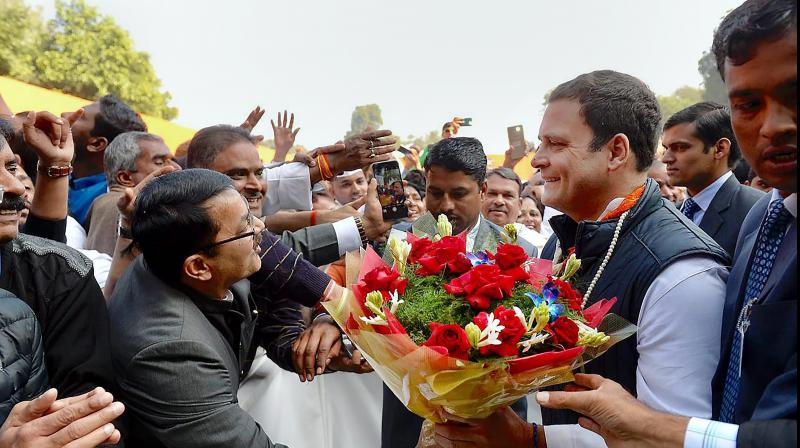 Newly elect Congress President Rahul Gandhi receives greetings from supporters after taking charge during an event held at the lawns of the All India Congress Committee (AICC) in New Delhi. (Photo: PTI)

New Delhi: Even as Rahul Gandhi took on the mantle of the President of Congress party, the ruling BJP on Saturday dubbed the Congress as a “corrupt thought process” and shrugged off his elevation, stating its working style and “corrupt ways” remained the same.

Launching a sharp attack on the Congress, BJP spokesperson Sambit Patra cited the sentencing of former Jharkhand chief minister Madhu Koda, who was supported by the Congress, in a corruption case to hit out at the party, claiming it would remain corrupt despite the change in leadership.

“We all know that Madhu Koda was an Independent MLA, but because of the fact that the government was formed with the outside support of the Congress party, the government then was almost a Congress government run by 10 Janpath, 24 Akbar Road by the help of Sonia Gandhi, Rahul Gandhi and Ahmed Patel,” he said.

The BJP spokesperson said it was an irony that despite the Congress not being in power for four years, corruption cases were still tumbling out.

He said when the Congress talks about a change in leadership, the country is seeing how during its 10-year rule, corruption of ten to fourteen lakh crore rupees took place under their very nose.

Meanwhile, senior leaders from across the political spectrum congratulated Rahul Gandhi on his elevation as the President of Congress party on Saturday. Top leadership of several allies of the Congress, including Akhilesh Yadav from Samajwadi Party, MK Stalin from the DMK and RJD's Tejashwi Yadav, were among the first to send best wishes to the newly-appointed party chief.   In a video message, tweeted by the Congress party's official handle,  as he wished him the best in his new role, General Secretary, CPI(M), @Sitaram Yechury recalled an important, often-quoted motto of Congress President Rahul Gandhi taken from Robert Frost "I have promises to keep and miles to go before I sleep," and hoped that he worked for the betterment of the nation.