Drum beaters had been especially summoned from old Delhi to lighten up the atmosphere which was resembling a festive occasion. 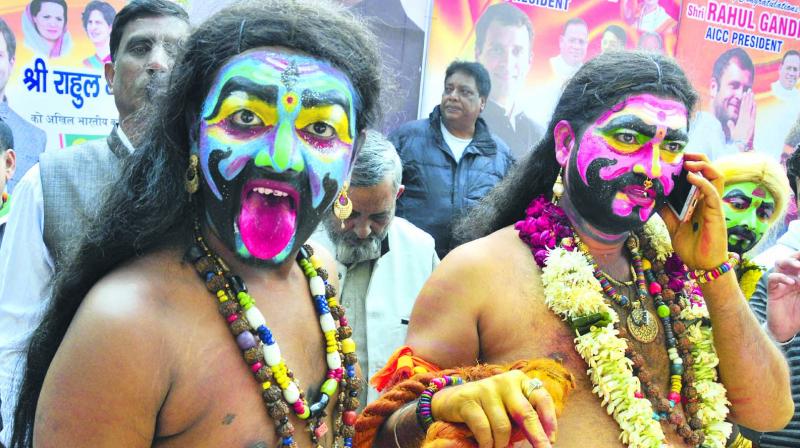 Artists pose during the celebrations for Rahul Gandhi’s elevation as Congress party President outside the All India Congress Committee in New Delhi. (Photo: Bunny Smith)

New Delhi: The Congress leaders and cadres were out in full force to welcome their new President Mr Rahul Gandhi. The roundabouts in the vicinity of Akbar Road that houses the Congress headquarters had full size cut outs and boards congratulating the new president and wishing him well. Akbar Road had to be closed for public as the Congress cadres gathered with flowers, crackers, sweets, confetti and costumes.

Several stalls had come up overnight to distribute water and sweets to the party cadres that came from far and away. Laddoos were being distributed at the Congress office entrance by party workers. While crackers made it almost impossible to hear each other. Mrs. Sonia Gandhi had to stop her speech twice and request party cadres to stop bursting crackers as it was impossible for her to carry on with her speech.

Drum beaters had been especially summoned from old Delhi to lighten up the atmosphere which was resembling a festive occasion. After Mr. Gandhi was handed over the certificate of being elected as President of the party ‘gulal’ color was being thrown by the party cadres in the air. Many workers of the Congress had brought with them artists who were performing the ‘Ghodi’ dance in which a man acts like he is seated on a horse and dances.

However, the star attraction was Ms Priyanka Gandhi, someone who is rarely seen at the Congress headquarters. Workers were desperate to  get a picture clicked.

A sizeable contingent had come from the family bastion of Amethi and Rae Barielly to witness the taking over of the sixth generation Gandhi as the Congress President. After the event was over the outgoing President had an open house for party workers who had come from across the country at her official residence 10 Janpath. 72 year old Ram Khilawan a Congress supporter from Salon village in Rae Barielly had traveled all the way to witness the event. After the event he said, “ we have been loyal to the family it is the family that has taken care of us and our village”