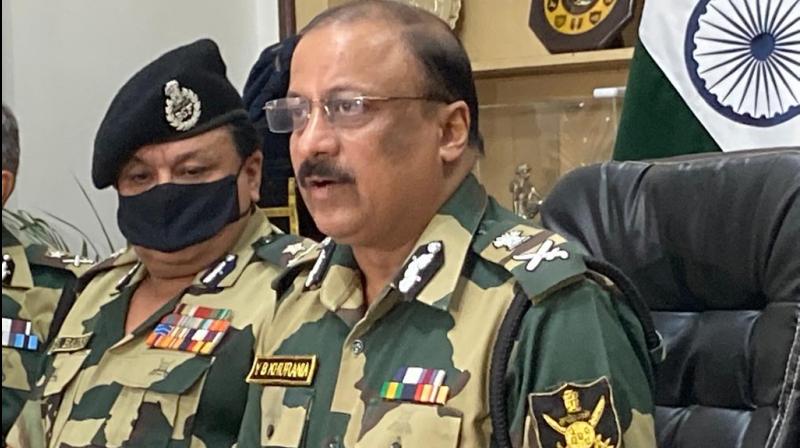 Kolkata: The Border Security Force (BSF) on Wednesday made it clear that the extension of its jurisdictional authority by the Centre from 15 kms to 50 kms from the international boundary in West Bengal would not create any conflict with the state police.

The strong assertion came from BSF special director general (Eastern Command) Y B Khurania a day after the state assembly passed a resolution against the additional territorial powers to the BSF.

He said, "We are not an investigating agency. We have a very cordial working relationship with the state police. We interact from time to time and share intelligence with them. We also understand the complicacies of working in the hinterland. Our troops are also sensitised about it."

Mr Khurania elaborated, "There is an apprehension in wake of the notification that the BSF might interfere with the policing. I would like to clarify here that the BSF has the power to search, seizure and arrest but can not investigate. The enhanced jurisdiction under the criminal procedure code will help BSF to strengthen the hands of the police. BSF has no policing powers as it does not have powers to register an FIR or to carry out an investigation."

He also rebutted Dinhata Trinamul Congress MLA Udayan Guha's  allegations against the male BSF troopers of touching the female villagers inappropriately in the name of frisking them at the border.

The BSF special DG pointed out, "We have a zero tolerance policy in such matters. These are taken very seriously and we are committed to it. We have around 4000 Mahila Seema Prahari deployed at different border entry gates in the EC. CCTVs have been installed at many places. We have plans to install them at all the gates. It is unfortunate that such allegations are made. There are also vested interests in making allegations against the security force to guard the trans-border crimes."