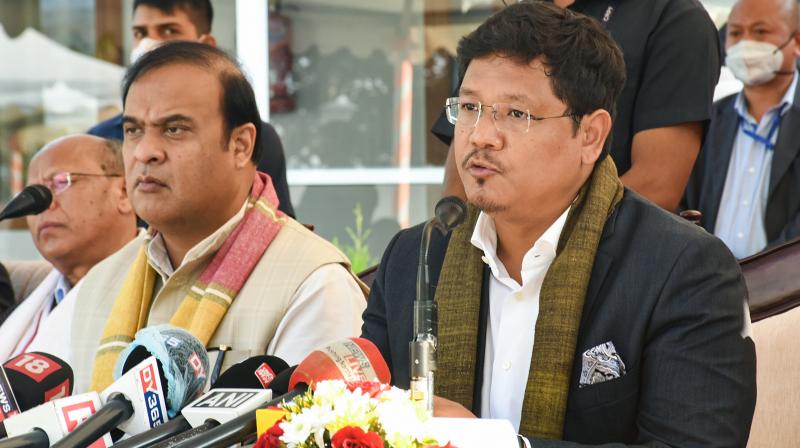 Guwahati: In a significant step forward in resolving their border rows, Assam and Meghalaya on Tuesday committed to taking all the necessary steps to settle inter-state border disputes in six areas by the end of this year.

Assam chief minister Himanta Biswa Sarma and Meghalaya CM Conrad Sangma, at a joint press conference on Tuesday, told reporters that the border committees set up jointly by the two states have made significant progress in finding an amicable solution.

Saying that the border committee is expected to submit its report by November 30, the two CMs said: “The committees will present reports before their respective state governments, which will then talk to the stakeholders. After that, a clear picture will emerge and a final statement will be issued.”

Noting that the two states had formed three committees each to resolve all the problems at six out of 12 disputed sites in Kamrup, Kamrup Metropolitan and Hailakandi districts, the Assam CM said: “In the first phase, we are looking to resolve problems at six places. Going by the spirit and pace, we are looking to issue a final statement by December 30.”

Mr Sarma said: “When country is celebrating the Amrit Mahotasav of Azadi and Meghalaya is stepping towards 50 years of existence, we the two neighbouring states intend to resolve this border dispute through talks and taking the people of the area on board.”

It is significant that the Centre had made several attempts earlier to resolve the inter-state border dispute through conciliation but it failed to yield any positive response so far. Since 2016, the issue has also been raised in the Assam Assembly on several occasions, but both the states have so far failed to resolve it.

In March 2020, the conflict escalated after the Assam police allegedly attempted to set up a border outpost in Umwali in Langpih, which had created resentment among the local Khasi population.