India   All India  17 Nov 2019  'Ram naam' bank, whose currency is lord Ram, to give bonus after Ayodhya Verdict
India, All India

'Ram naam' bank, whose currency is lord Ram, to give bonus after Ayodhya Verdict

Also, an award will be given to devotees who have written the name of Lord Ram at least 1.25 lakh times by the midnight of November 9-10. 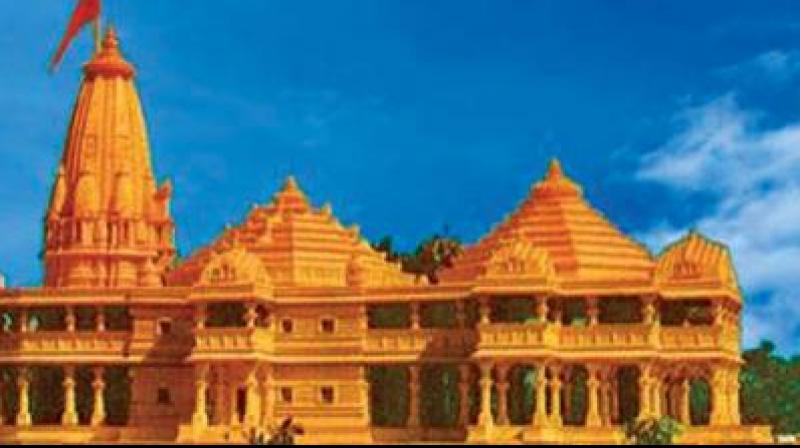 The Allahabad-based 'bank', which neither has ATMs, nor cheque books and its only 'currency' is Lord Ram. (Photo: Representational)

Lucknow: 'Account holders' of Ram Naam Bank, where devotees deposit booklets with the name of Lord Ram written in it, will get a special "bonus" in view of the Supreme Court paving the way for construction of a Ram Temple at the disputed site in Ayodhya.

The Allahabad-based 'bank', which neither has ATMs, nor cheque books and its only 'currency' is Lord Ram, has announced the bonus for nearly one lakh of its account holders.

Also, an award will be given to devotees who have written the name of Lord Ram at least 1.25 lakh times by the midnight of November 9-10 and deposited in the 'bank'.

Ashutosh Varshney, the chairman of Ram Naam Sewa Sansthan which runs the bank, said the bonus means that the name of Lord Ram written by devotees -- either handwritten, typed on specially-designed pages or through mobile app -- will be considered double.

"If a devotee has written 'Ram Naam' one time, it will be considered as two. However, for the purpose of award/honour the minimum benchmark has been fixed as 1.25 lakh. Those who had written the name of Lord Ram at least 1.25 lakh times by midnight of November 9-10, were considered for the award," he said.

"The booklet given by the Ram Naam Bank (a non-profit organisation) has 30 pages, and each page consists of 108 cells, where the name of Lord Ram could be written. The bonus was announced on November 10," Ashutosh Varshney told PTI.

Those selected for award will be given a certificate from Ram Naam Bank, a shawl and a 'shriphal' at a special function organised by it in Sangam area of Allahabad during the 2020 Magh Mela.

Gunjan Varshney, one of the trustees of Ram Sewa Trust, which is also associated with the Ram Naam Bank, told PTI, "Around 1,200 devotees had pledged during Kumbh Mela-2019 that they will write Lord Ram's name, and urge Him to show a path, which leads to peaceful and amicable settlement of the Ayodhya dispute."

She also said that devotees from different walks of life, from post-grad students to senior citizens took part in writing the name of Lord Ram during 2019 Kumbh Mela.

Ayushi Shukla, who works in an IT firm in Noida, said, "We had taken a pledge during the 2019 Kumbh mela that everyday we will fill at least 10 booklets by writing Lord Ram's name in it... I wrote the name of Lord Ram over 10,000 times during this period. I am happy that there was peace in Ayodhya after the judgment."

Settling the fractious issue that goes back more than a century, the Supreme Court on November 9 backed the construction of a Ram temple by a government trust at the disputed site in Ayodhya, and ruled that an alternative five-acre plot must be found for a mosque in the Hindu holy town.

Ashutosh Varshney, who manages the bank's affairs, is carrying on the legacy of his grandfather who had set up the organisation in early part of the 20th century.  The bank has no monetary transactions. Its members have a booklet of 30 pages, containing 108 cells in which they write 'Ram Naam' 108 times everyday in red ink as it is the colour of love.

This booklet is deposited in the individual's account.  He said people write the name of Lord Ram in Urdu, English and Bengali.

"The divine name of Lord Ram is credited in the account of account holder. A passbook is issued like other banks. All these services are provided free of cost. Ram Naam Bank has ledgers and passbooks like any other bank, and maintains the records of its 'depositors'. The only currency that works in this bank is the name of Lord Ram," Gunjan Varshney said.

She also said the size of one's account was determined by the number of times one was able to write the name of the Lord and deposit it in the bank.