The Indian Navy and the Goa Police cordoned off the site of the mishap and were in the process of clearing the wreckage. 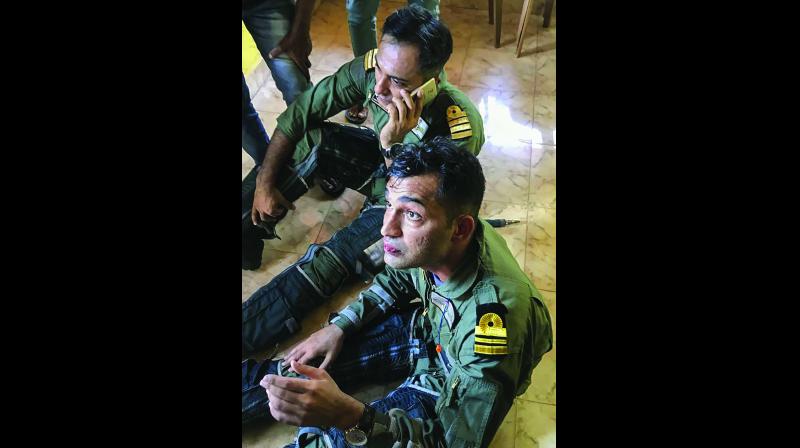 Pilots Captain M Sheokhand and Lieutenant Commander Deepak Yadav (right) after they managed to eject safely from their MiG-29K fighter jet that crashed shortly after it took off from INS Hansa in Goa on Saturday. (Photo: PTI)

New Delhi: A MiG-29K twin seater aircraft of the Indian Navy crashed on Saturday afternoon in Goa after a bird hit. Both the pilots were able to safely eject from the aircraft.

“The pilots, Capt M. Sheokhand and Lt. Cdr. Deepak Yadav are safe and have been recovered. There has been no loss of life or damage to property on ground,” said Indian Navy spokesperson Commander Vivek Madhwal.

Defence minister Rajnath Singh also spoke to the pilots. “Spoke to the pilots, Capt Mrigank and Deepak Yadav of the MiG-29K which crashed after the take-off from Goa today. It is a matter of great satisfaction that they managed to eject in time and both of them are safe,” tweeted Mr Singh. According Indian Navy, at about noon, the MiG-29K on a routine training sortie, encountered a flock of birds after take off from Dabolim. “The pilot observed that the left engine had flamed out and the right engine had caught fire. Attempts to recover the aircraft were unsuccessful,” said Indian Navy.

The pilot, showing huge presence of mind, pointed the aircraft away from populated areas and both pilots ejected safely, it said. An inquiry to investigate the cause of accident has been instituted by the Navy. According to reports, the aircraft is attached to INS Hansa located near Dabolim in Goa.

The Indian Navy and the Goa Police cordoned off the site of the mishap and were in the process of clearing the wreckage.