Delhi was blanketed by a thick smog for four consecutive days till Friday as unfavourable weather hampered dispersion of pollutants. 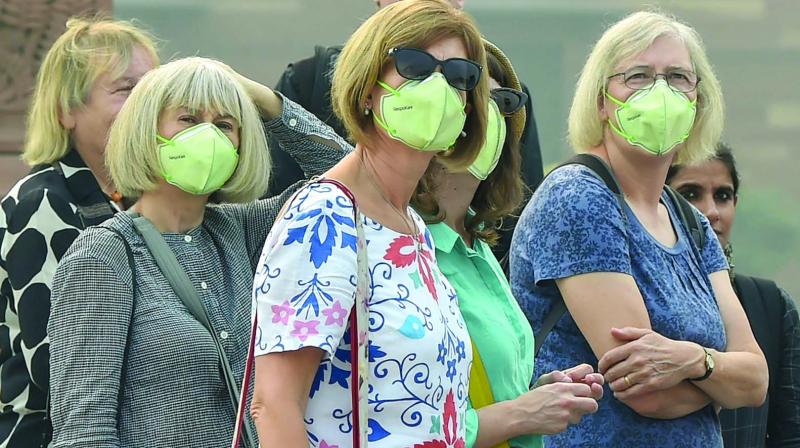 New Delhi: With pollution in Delhi and its neighbouring areas reaching alarming levels due to rampant stubble-burning in Punjab, it’s become an annual ritual for foreign diplomats to brace themselves for the horror before the onset of winter.

Though they have been raising the issue with the Union government every year, they feel frustrated that they have to face the same experience every November without any improvement.

Now, dean of the Diplomatic Corps, ambassador Hans Dannenberg Castellanos, has expressed concern over the poor quality of air in Delhi and said the Even-Odd four-wheeler vehicular road rationing scheme is a good start, but suggested that a real solution can only be found by working closely with farmers in Punjab on the issue of crop residue burning.

“It (pollution) affects all of us. And it does not have a diplomatic solution nor is the MEA responsible for solving it. This is a problem of major proportions to be solved by city and federal government... The Even-Odd scheme is a good start, but working closely with the farmers in Punjab on the issue of burning crops should also be strongly considered,” Mr Castellanos, ambassador of the Dominican Republic, was quoted by news agencies as saying.

On Friday it was reported that the blog post of the Costa Rican ambassador to India, Mariela Cruz Alvarez, has gone viral after she declared that she had moved out of Delhi to the more environmentally friendly Bangalore.

“I’m a living proof that our planet is dying today, coughing as i write with my indian bronchitis,” she wrote.

“I am sick with a serious upper respiratory infection due to New Delhi’s unbreathable air. My tropical lungs couldn’t take the toll. It is not funny to see your lungs expelling a dark residue as if I was a smoker — which I am not...We need to wake up fast. India I love you and it hurts me to see you drowning in loads of plastic and toxic air. Where is the leadership? Clean air and water are basic human rights,” she added in her blog post.

“Our concern is the health of all citizens and residents of Delhi and of those nationals from our countries that work, live and visit Delhi,” Mr Castellanos was quoted as saying by a TV channel earlier this month.

According to reports, he will receive suggestions from diplomats of other foreign missions in New Delhi on what to propose to the Central government to improve the air situation in the Capital.

“The situation is very bad. Whenever we go out, we have to wear masks. We have installed air-purifiers in our office and homes but the level of pollution is shocking for us,” a diplomat of an Asian country, who did not wish to be identified, told this newspaper. “Whenever we go out, we can feel the soreness in our throats. It’s a very alarming situation,” another foreign diplomat said.

Delhi was blanketed by a thick smog for four consecutive days till Friday as unfavourable weather hampered dispersion of pollutants. According to news agency reports, the national capital witnessed a dip in pollution levels on Saturday morning even as the air quality in the city remained in the “severe” category.