India   All India  17 Nov 2018  Strike in Kerala over arrest of Hindu woman leader on pilgrimage to Sabarimala
India, All India

Hindu Aikyavedi state President K P Sasikala was arrested by police near Marakkoottam near Sabarimala at 2.30 am on Saturday. 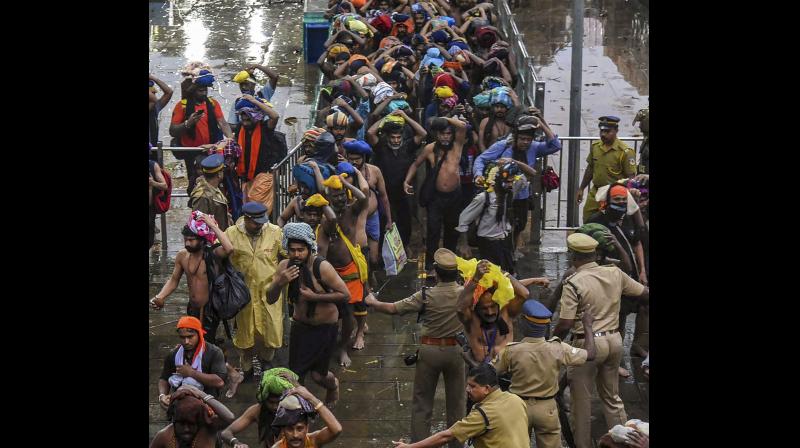 Devotees enter the Sabarimala temple as it opens amid tight security on Friday. (Photo: PTI)

Kochi: Rightwing Hindu outfits have called for a dawn to dusk hartal (shutdown) in Kerala on Saturday in protest against arrest of a senior Sangh Parivar leader who was on the pilgrimage to Sabarimala Lord Ayyappa temple.

"She was arrested as she was on the way to the hill shrine carrying irumudikkettu (bundle carrying sacred offerings) to offer prayers. Some other activists have been taken into preventive custody," Kumar told PTI.

He accused the Kerala government of trying to destroy the Sabarimala temple.

The VHP leader said essential services and vehicles of Ayyappa devotees will not be affected by the hartal.

Unprecedented security arrangements have been made at the shrine, which opened for the third time on Friday for the two-month-long pilgrimage season commencing Saturday after the Supreme Court allowed women of menstrual age to offer prayers. The temple opened on Friday amid a tense standoff involving social activist Trupti Desai in Kochi and a move by its administrator to seek time from the Supreme Court to implement its verdict.

The 41-day mandalam festival will conclude on December 27 after Mandala puja, when the shrine will close after the 'Athazhapuja' in the evening. It would reopen for the Makaravilakku festival on December 30.

The Makaravilakku festival would be celebrated on January 14 after which the shrine will close on January 20, marking the culmination of the pilgrim season, when lakhs of devotees are expected to throng the shrine.

The temple complex and nearby areas had witnessed widespread protests after the state government decided to implement the September 28 apex court verdict.

The Supreme Court is slated to hear petitions seeking review of its September 28 order in January, but has refused to stay it.