Elections for the 230-member Madhya Pradesh assembly are scheduled to be held on November 28. 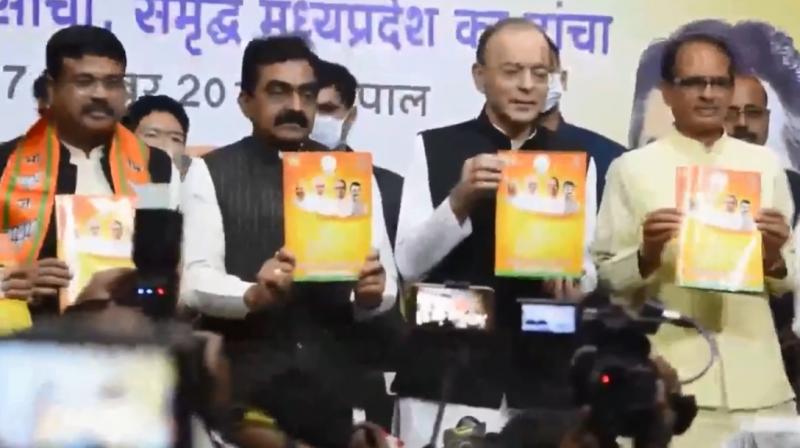 The manifesto, called as 'Drishti Patra' or vision document, was released by Finance Minister Arun Jaitley at the state BJP headquarters in Bhopal. (Twitter screengrab | @BJP4MP)

Bhopal: Providing 10 lakh jobs per year to youths in Madhya Pradesh and welfare of all sections of society are among the major promises made by the Bharatiya Janata Party (BJP) in its manifesto for the November 28 assembly elections, which was released in Bhopal on Saturday.

The BJP, which has been ruling the state since 2003, is trying to retain power amid the opposition Congress's allegations of a collapse of governance and its failure to work for agriculturists.

Madhya Pradesh last year witnessed wide-scale protests by farmers for better Minimum Support Price for their produce and other demands, forcing the government to announce a slew of measures.

The manifesto, called as "Drishti Patra" or vision document, was released by Finance Minister Arun Jaitley at the state BJP headquarters in Bhopal. "We will provide 10 lakh jobs and self employment opportunities per year for the youth of the state," Chief Minister Shivraj Singh Chouhan told reporters.

Chouhan, accompanied by Union ministers Dharmendra Pradhan and Narendra Singh Tomar, promised to make a provision for free education for the poor. "We have prepared a roadmap for the development of the state as well as the welfare of each section of the society," he said.

The BJP has promised measures to ensure the welfare of farmers, women, backward classes and traders, besides the youth, in the state.

Elections for the 230-member assembly are scheduled to be held on November 28. The results will be declared on December 11.

The opposition Congress had released its manifesto — 'Vachan Patra' last Saturday. The Congress promised an 'adhyatmik vibhag' (spiritual department) in the state, as well as plans to promote the Sanskrit language.

The Congress manifesto speaks of developing the 'Ram path, a mythical route taken by Lord Ram during his 14-year exile, and the commercial production of 'gaumutra' (cow urine) and 'kanda' (cowdung cakes).