The names were finalised by BJP's Central Election Committee, which met on Wednesday. 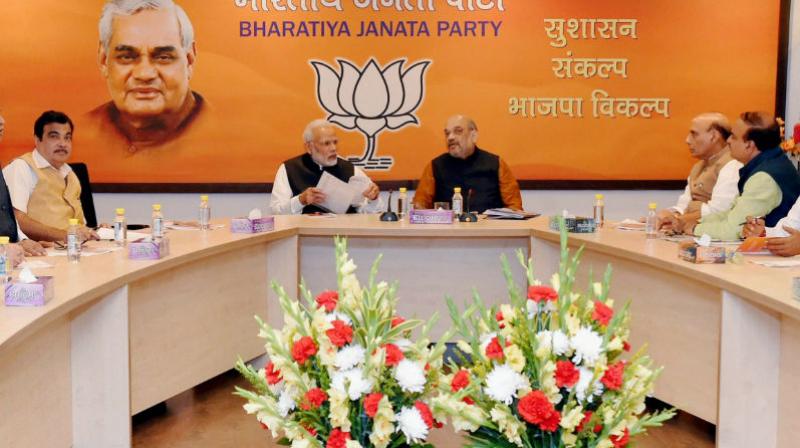 The BJP's parliamentary board, led by Narendra Modi and BJP president Amit Shah met on Wednesday at the BJP's national headquarters in Delhi to discuss probable candidates for Gujarat Assembly elections. (Photo: PTI)

Ahmedabad: The Bharatiya Janata Party (BJP) on Friday released the first list with 70 candidates for the two-phase poll in Gujarat on December 9 and 14.

The names were finalised by BJP's Central Election Committee, which met on Wednesday.

The Lok Janshakti Party on Friday said it would not field any candidate for Gujarat polls and announced its support to ally BJP in the election, following a hectic campaign by its chief and Union minister Ram Vilas Paswan in favour of the saffron party.

In the run up to the polls, which will be held in two phases next month, the BJP has deployed Ram Vilas Paswan in its campaign in an attempt to woo Dalit voters.

Election Commission on October 26 announced a two-phase poll in Gujarat on December 9 and 14, setting off a high-decibel face-off between the ruling BJP and the Opposition Congress.

Counting will be held on December 18 along with that of Himachal Pradesh.

While the first phase will be held in 89 of 182 seats, the notification for the second phase will be issued on November 20 for the other 93 seats in 14 districts.

With inputs from PTI