Modi gave the analogy of a mother telling her child to eat a little less or not to eat. 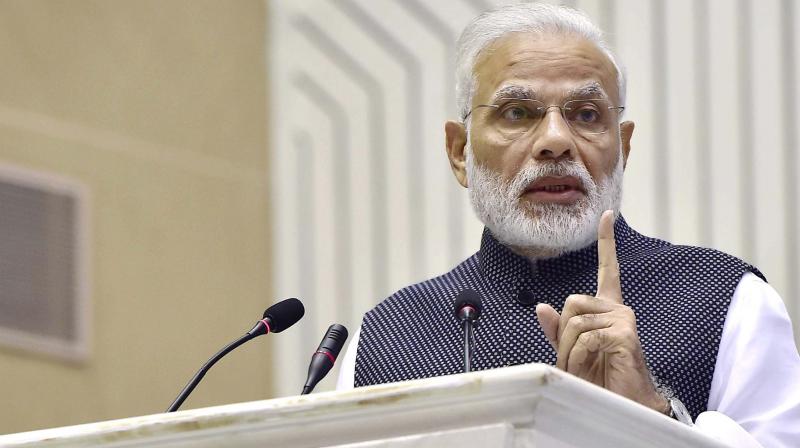 Prime Minister Narendra Modi gestures as he delivers a speech after the awards ceremony of National Awards for Excellence in Journalism, in New Delhi. (Photo: PTI)

New Delhi: Quoting Mahatma Gandhi to support his assertions seeking self-regulation by the media, Prime Minister Narendra Modi said there should be no government interference in the functioning of the media, but advised self-regulation, by making appropriate changes with times, asserting that things will not change from external control.

The Prime Minister, at the golden jubilee celebrations of Press Council of India (PCI), also expressed concern over recent murders of journalists and said that it was very “painful” and a “most dangerous” way of suppressing truth. His remarks came against the backdrop of murder of two journalists in Bihar.

“Government should not do any interference. It is true that self-introspection is not easy. It is the responsibility of the PCI and those associated with the press to see to it that what appropriate changes you can make with time. Things do not change from external control,” the Prime Minister said.

Referring to the Kandahar hijack in 1999, he said new channels’ round-the-clock reportage of angry reactions of the families of passengers in the Indian Airlines flight made terrorists emboldened as they thought they can get anything from the Indian government with this kind of public pressure.

The episode set off introspection in the media which later came with norms for the coverage of such incidents, Me Modi said.

As he spoke about self-regulation, Mr Modi gave the analogy of a mother telling her child to eat a little less or not to eat. The child would listen to his mother but not to an outsider, he said.

The Prime Minister said that the media should also be regulated from within and things should be resolved within the family in the interests of the society. Governments should not even venture close to having an intention of interfering, he added.

The Prime Minister suggested that issues relating to self-regulation should be seen through the medium of organisations like the Press Council and drawing from the experience of senior people and in the interests of the society.

He added that self-regulation is not an easy task. The Prime Minister said that after the Kandahar attack, the media organisations introspected and and dissected their own errors.   “After 26/11 terror attack in Mumbai, another moment of introspection came yet the matter is still incomplete,” he said. “I believe mistakes are committed by us and by you. The media should not be assessed by its mistakes,” he said.

“Till the time there is a section of responsible people, who want to remove the weaknesses and make it better, I believe it is a positive effort in this sector and it should continue,” he said.

Modi said that when Emergency was declared in 1975 , the Press Council was shut and it was reborn when the Morarji Desai government came to power in 1977.

Speaking at the occasion, Union Information and Broadcasting Minister M Venkaiah Naidu said the Centre is in favour of self-regulation and not thinking of imposing restrictions on the media, while news organisations should exercise “necessary self-restraint and avoid sensationalism”, said here today.

He said freedom of press or freedom of expression is best utilised only when the “value of such freedom is fully appreciated”. “When freedom is not exercised judiciously, our existing laws provide for necessary intervention and course correction. The government is not thinking of any restriction on any medium, but it expects all the stakeholders to be responsible in using different platforms,” Naidu said. “My advice applies more to the electronic media than the print media,” the Union minister pointed out.