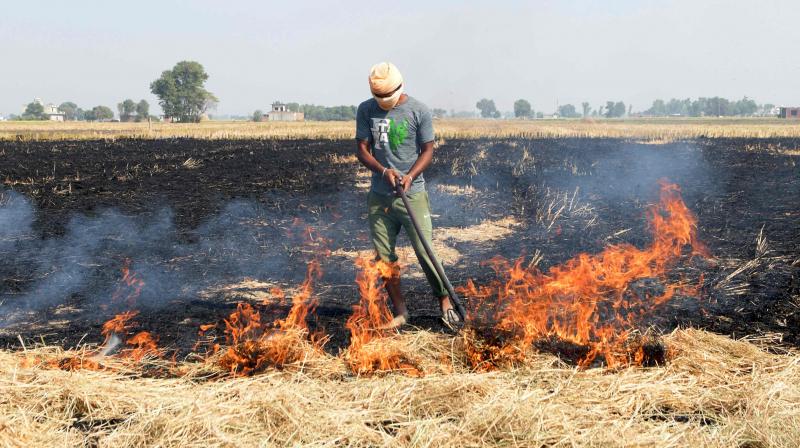 A farmer burns straw stubble after harvesting a paddy crop, in a field on the outskirts of Amritsar on October 16, 2020. (AFP)

New Delhi: The Supreme Court on Friday appointed a former judge of the court, Justice Madan B. Lokur, to monitor the implementation of various measures taken by Punjab, Haryana and Uttar Pradesh to curb stubble burning in agricultural fields, which is a major source of choking air pollution in Delhi-NCR during winter every year.

The appointment of the Justice Lokur committee, with him as the sole member, was opposed by the Centre, but the court rejected the Centre’s attempts to stall the committee’s formation.

The Centre’s resistance to Justice Lokur’s appointment appears rooted in his addressing seminars and writing articles on free speech and the importance of dissent in democracy, that is seen as under stress due to questionable State actions.

Saying they were not inclined to take an assessment of the effectiveness of measures taken by the three states to curb stubble burning, Chief Justice Sharad A. Bobde, heading a three-judge bench that included Justices A.S. Bopanna and V. Ramasubramanian, said: “Nonetheless, it is necessary there must be some monitoring of stubble burning with a view to its prevention before it assumes abnormal proportions.”

“We are only concerned about the citizens of Delhi NCR (national capital region) being able to breathe in fresh clean air,” said Chief Justice Bobde in the course of the hearing.