India   All India  17 Oct 2019  'Perception of NE should be changed to attract visitors': Tourism minister Imphal
India, All India

'Perception of NE should be changed to attract visitors': Tourism minister Imphal

The four-day festival aims at spreading awareness about conservation of endangered Shirui Lily. 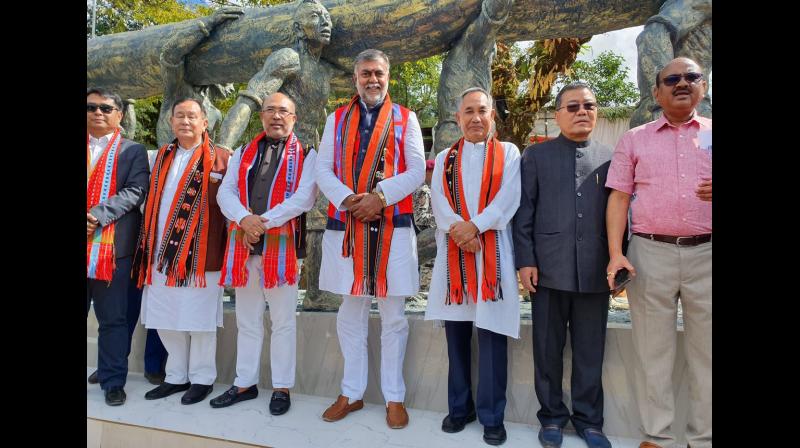 'A collective effort is needed from all the stakeholders to explore ways to attract more tourists to the state,' the minister said. (Photo: Twitter | @prahladspatel)

Imphal: Union Minister of State (Independent Charge) for Tourism and Culture, Prahlad Singh Patel, has said the wrong perception of the northeast needs to be changed to attract more tourists.

Inaugurating the third Shirui Lily festival at Ukhrul district in Manipur along with Chief Minister N Biren Singh, Patel said despite being gifted with scenic beauty and rich cultural heritage, due to some wrong perceptions, the region is unable to attract tourists in large numbers.

"A collective effort is needed from all the stakeholders to explore ways to attract more tourists to the state," he said.

Patel said he has written to the Union HRD Minister whether it would be possible to make it compulsory for students of the central schools to visit the northeast at least once.

"One who has witnessed the region at a tender age would never forget it throughout his/her life," he said.

The four-day festival that began on Wednesday, aims at spreading awareness about the conservation of the endangered Shirui Lily and to promote Ukhrul as a tourist destination. Speaking on the occasion, Biren Singh said the law and order situation in the state has improved under the two-and- half years of BJP-led rule.

The chief minister said more such fests would be organised as there is an environment of peace in the state.

"Earlier, tourists used to fear to visit the hill areas of the state due to the poor law and order. However, that has changed," he said.

Lauding the hospitality of the Tangkhul community, Singh said more than 2,000 homestays have been booked by tourists for the festival.

Noting that all disputes can be settled through dialogue, the chief minister said Manipur belongs to its people and asserted that the state government would not allow anything that may hurt the interests or sentiments of any community living in the state.

The chief minister said the state government is urging the Centre to bring about a "topographical need-based budget" to ensure inclusive development of the state.

"The Centre has implemented the Hill Areas Development Programme (HADP) for states with hilly topography like Manipur. Tamenglong district in the state is among the 82 districts across the country where the scheme would be implemented in the first phase," he said.

As part of it, Tamenglong would get Rs 90 crore for implementation of developmental projects, Singh said.

Mentioning that around Rs 600 crore would be spent on improving road connectivity in Ukhrul district, the chief minister said around Rs 250 crore has been sanctioned for construction of roads between Kamjong and Tengnoupal districts.

He said TRIFED (Tribal Cooperative Marketing Development Federation of India) under the Ministry of Tribal Affairs has agreed to set up 75 Van Dhan Vikas Kendras in the state. Singh said the Ministry of DoNER has assured that all the hill districts of the state would be covered under it.

The chief minister said the state Cabinet has approved the 'Stand Up Manipur' scheme as part of which subsidy and soft loans would be provided to people from the SC, ST, OBC categories, women and minorities of the state for setting up businesses and urged them to avail the benefits.

Earlier, Patel unveiled the 'Strength of Unity' pillar at Shirui village and inaugurated a new building of the Forest Division Office at Ukhrul town.