Protesters stopped the women while they were trekking towards the Lord Ayyappa temple in Kerala. 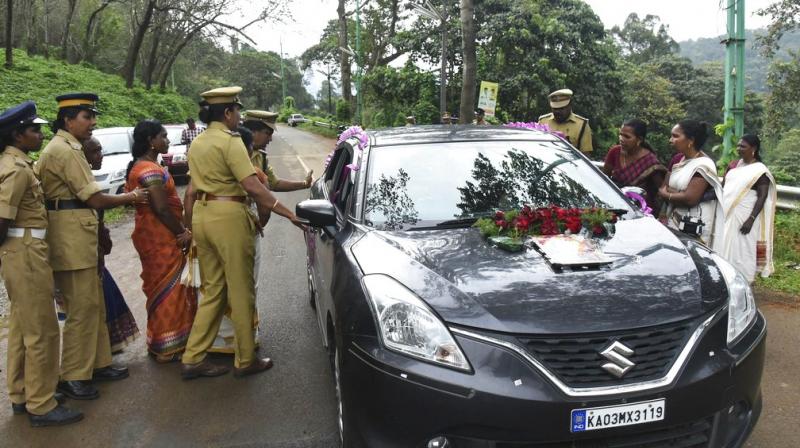 A woman from Kerala and another from Andhra Pradesh were turned away by protesters. (Photo: PTI)

Kochi: Two women, one from Kerala and another from Andhra Pradesh, were turned back by the protesters as they were heading towards the renowned Sabarimala temple which will open its doors for women of all ages at 5 pm today.

Protesters stopped the women while they were trekking towards the Lord Ayyappa temple in Kerala. They managed to walk only a few hundred meters before being turned back.

According to reports, the woman from Kerala who was turned back is a journalist named Libi CS. Hours before her walk to Sabarimala temple, she had announced her plan on Facebook.

"Friends, four of us are leaving to Sabarimala today, which includes atheists like me and two devotees," the journalist, Libi CS, wrote on Facebook on Tuesday.

The police shielded her from a group of protesters who had surrounded her at Pamba, 65 km from Sabarimala.

Another woman Madhavi, was stopped and turned away by the protesters after she walked a few meters from Pamba.

In its verdict last month, the Supreme Court revoked centuries-old ban that restricted women of menstruating age between 10 to 50 years from entering the shrine.