UP BJP MLA’s remark on Taj Mahal sets off furore

The BJP said it was Som’s “personal view” and that the Taj Mahal is part of India’s “cultural heritage”. 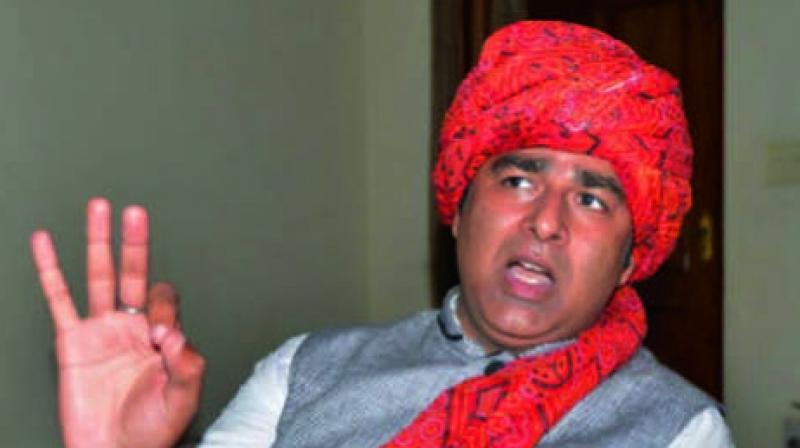 Lucknow/New Delhi: Muzaffarnagar riots accused and the BJP’s Saldana MLA Sangeet Som triggered a controversy on Monday by claiming that the Taj Mahal was a “blot” on Indian culture, and even misquoted history by saying that Mughal emperor Shah Jahan, the builder of the 17th century mausoleum, had “jailed his father” and wanted to wipe out Hindus from the country. (The reality, of course, is that it was Shah Jahan himself who had been jailed by his son Aurangzeb, who had seized the throne.)

Mr Som’s remarks at a rally on Sunday came after the Yogi Adityanath-led Uttar Pradesh government removed the Taj Mahal from the list of attractions in its tourism booklet. Sensing the political furore that its MLA’s remarks could generate, the BJP said it was Mr Som’s “personal view” and that the Taj Mahal is part of India’s “cultural heritage”. It also said the party doesn’t have any view on specific monuments, and its members can hold whatever opinion they have.

Lashing out at the BJP leadership, AIMIM leader Asaduddin Owaisi asked whether Prime Minister Narendra Modi “will stop hoisting the tricolour” at the Red Fort if in the BJP’s view it was among the monuments built by “traitors”. Mr Owaisi also asked if Mr Modi and Yogi Adityanath will “tell tourists not to visit the Taj Mahal?” He challenged the PM and the UP chief minister to bring out adverstisement saying: “Don’t go to the Taj because in our view it’s a symbol of traitors”.

“Even Hyderabad House in Delhi was built by a ‘traitor’... Will Modi stop hosting foreign dignitaries there?” asked Mr Owaisi, an MP from Hyderabad.

Trying to steer clear of the controversy, UP tourism minister Rita Bahuguna Joshi said: “It’s Sangeet Som’s individual opinion. The Taj Mahal is a cultural heritage and we are proud that it is housed in UP.”

Stepping into the row, BJP spokesman G.V.L. Narasimha Rao described Muslim rule in India as “barbaric and a period of incomparable intolerance”, but also said the party has no view on any specific monuments, and its members can hold whatever opinion they have. He also hit out at the AIMIM leader, saying: “Even in present times, Muslim leaders such as Owaisi exhibit the same level of intolerance as Muslim rulers once displayed”.

The UP BJP MLA made these statements after inaugurating the statue of 8th century king Anangpal Singh Tomar at Sisoli village in Meerut. He said it was unfortunate that those who had invaded India were being glorified in history. Referring to “kalank katha”, or the black mark of history, he said: “Whether it is Babar, Akbar or Aurangzeb, the government is working to erase them from history.”

Mr Som also said the lives and achievements of the “real great men” of the country like Maharana Pratap and Shivaji would now be taught in schools and colleges.

“Many people were pained to see that the Taj Mahal was removed from the list of places (tourist destinations). What type of history is this? Is it right to teach our children that the person who built the Taj Mahal also imprisoned his father? Do you call it a history when the one who built the Taj targeted many Hindus in Uttar Pradesh and Hindustan?” Mr Som asked, as he got the history of the Mughals mixed up. It was Aurangzeb who had imprisoned his father Shah Jahan. As he went on to speak about how Hindu kings have been missing from the history books, he claimed: “No one can now stop the construction of the Ram Temple in Ayodhya and Krishna temple in Mathura.”

Mr Som’s comments came days after reports in a section of the media that a booklet brought out by the tourism department of the Uttar Pradesh government had left out the Taj Mahal from its list of major tourist destinations.

The state government had issued a press release stating that tourism projects worth Rs 370 crores were proposed, under which schemes worth Rs 156 crores were meant for the Taj Mahal and its surrounding areas in Agra.