The stealth corvette has been designed by the Indian Navy’s in-house body, the Directorate of Naval Design under Project 28 (Kamorta Class). 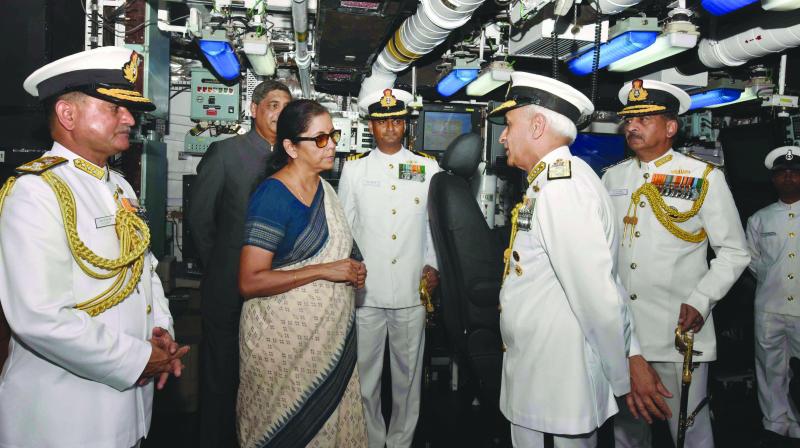 Union minister for defence Nirmala Sitharaman interacts with Chief of Naval Staff Admiral Sunil Lanba at the commissioning ceremony of INS Kiltan into the Indian Navy at naval dockyard in Visakhapatnam. (Photo: PTI)

Kiltan is the latest indigenous warship after Shivalik class, Kolkata class and sister ships INS Kamorta and INS Kadmatt to have joined the Indian Navy’s arsenal wherein a plethora of weapons and sensors have been integrated to provide a Common Operational Picture, an official release said.

It is India’s first major warship to have a superstructure of carbon fibre composite material resulting in improved stealth features, lower top weight and maintenance costs, it said.

On the occasion, Ms Sitharaman said the Centre was committed to achieving self-reliance in the defence sector on the concept of “Make in India” and was taking all measures in this regard.

“INS Kiltan strengthens our defence system and will be a shining armour in our ‘Make in India’ programme as it is totally bu-ilt here,” the defence minister said. “The governm-ent is committed to achie-ving self-reliance in the defence sector and prepared to provide any amo-unt of funds in this direction,” she said.

The stealth corvette has been designed by the Indian Navy’s in-house body, the Directorate of Naval Design under Project 28 (Kamorta Class).

In the future, it would also be installed with short range SAM system and carry an integral ASW helicopter.