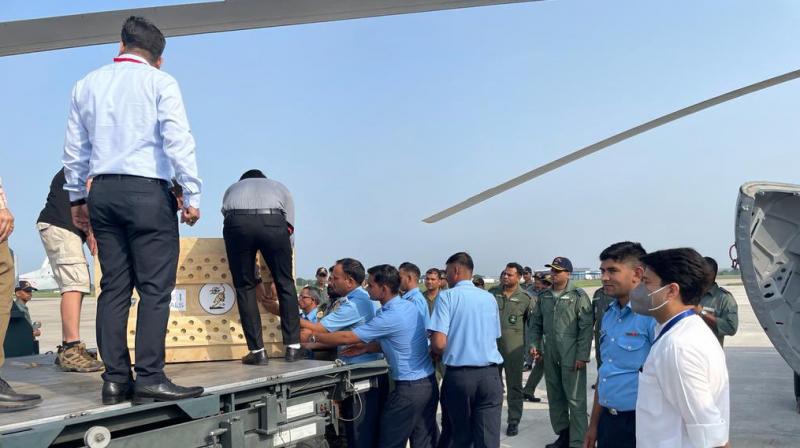 Bhopal: The special cargo flight carrying eight cheetahs from Namibia landed in Gwalior in Madhya Pradesh on Saturday morning and the felines will be released in special enclosures in the state's Kuno National Park (KNP) by Prime Minister Narendra Modi, officials said.

At around 10.45 am on September 17, which is also Modi's birthday, three of the cheetahs will be released in quarantine enclosures of the park by the Prime Minister, they said.

The flight carrying eight cheetahs and crew left Windhoek, the capital of Namibia in Africa, at around 8.30 pm (Indian time) and the plane is expected to land at Gwalior's Maharajpur air base at around 6 am on Saturday, Madhya Pradesh principal chief conservator of forest (wildlife) J S Chauhan told PTI.

After completing necessary formalities, including paperwork, at Gwalior the cheetahs will be flown to Palpur village, some 165km away, in Sheopur district in two helicopters, a Chinook and a Mi category chopper, he said. From Palpur, the felines will be brought to Kuno National Park (KNP) in Sheopur district by road, Chauhan said.

The cheetah intercontinental translocation project is taking place at a time when India has completed 75 years of its independence. The eight cheetahs - five females and three males - are being brought from Namibia as part of 'Project Cheetah', the world's first inter-continental large wild carnivore translocation project, officials said. In a departure statement, India's High Commissioner to Namibia Prashant Agrawal said, This is a very special moment indeed. As these magnificent cheetahs board the flight to India, we are being witness to history being made here today. This is a global first. This intercontinental translocation is the first of its kind, with no parallels ever. The reintroduction has a special significance as India marks its 75th independence anniversary this year," Agrawal said.

The Indian envoy thanked the team of Cheetah Conservation Fund (CCF) led by Dr Laurie Marker for making significant contributions in executing the translocation project. These cheetahs are the goodwill ambassadors for India-Namibia relations and, indeed, for the cause of conservation of the fastest land animal all over the world, he said. Prime Minister Modi will arrive at the Gwalior airport from New Delhi at around 9.20 am and leave for KNP, where he will release the cheetahs into quarantine enclosures at around 10.45 am, officials said.

As per the earlier plan, the special plane carrying the big cats from the African country was to land at the Jaipur airport, from where they were to be flown to KNP, around 400km from the Rajasthan capital. The release of wild cheetahs by the prime minister in KNP is part of his efforts to revitalise and diversify India's wildlife and its habitat, said a statement issued by the Prime Minister's Office (PMO) on Thursday.

The introduction of the fastest land animal in India is being done under Project Cheetah, which is world's first inter-continental large wild carnivore translocation project, the statement said. Cheetahs will help in the restoration of open forest and grassland ecosystems in India. This will help conserve biodiversity and enhance ecosystem services like water security, carbon sequestration and soil moisture conservation, benefiting the society at large, it said. Madhya Pradesh Chief Minister released a glimpse of a cheetah arriving at KNP which sounds Meow on his Twitter handle. "It is a matter of extreme happiness that cheetahs are coming to Kuno National Park. We the people of Madhya Pradesh are eager to welcome our new guests," Chouhan said in a tweet.

Congress leader Digvijaya Singh tweeted, "Some more of the same Cheetah. Grateful to Dr Manmohan Singh ji Jairam Ramesh ji and now Modi ji but above all Ranjit Sinh ji Retd IAS a keen Wildlifer who led the campaign." The last cheetah died in the country in 1947 in Korea district in present day Chhattisgarh, which was earlier part of Madhya Pradesh, and the species was declared extinct from India in 1952.

The 'African Cheetah Introduction Project in India' was conceived in 2009. A plan to introduce the big cat in the KNP by November last year was delayed due to the COVID-19 pandemic.

Meanwhile, people residing around KNP are happy that the government has selected the wildlife sanctuary for the intercontinental cheetah translocation project, and hoped the move would create job opportunities and improve the fortunes of the region. According to the Cheetah Conservation Fund (CCF), an international not-for-profit organisation headquartered in Namibia and dedicated to saving the majestic animal in the wild, the five female cheetahs bound for India are aged between two years and five years and the male siblings are aged between four-and-a-half years and five-and-a-half years.

"It is a matter of pride for the people of Sheopur district that PM Modi has selected KNP for reintroducing cheetahs. We are waiting with bated breath to welcome the cheetahs," said Kamal Singh, who resides in Sesaipura village located in the vicinity of the national park. Bharat Sharma, a resident of Karahal, said, "We are hopeful that now our future is secure as cheetahs will be rehabilitated in Kuno National Park, which will turn the fortunes of the region for better. We are now confident that KNP and Sheopur will be known the world over now and the programme will generate employment opportunities for people, especially youths."

The Maharajpura airbase is connected with a terminal building named after BJP stalwart late Vijayaraje Scindia, which is a civil airport, and is connected with a corridor for planes to reach there after landing at the main airstrip. The cheetahs will remain without food during their air and road journey and they will be given something to eat once they are released in the enclosures, another official said.

Chief conservator of forest (CCF) Uttam Sharma said a dais has been set up in the KNP, under which special cages carrying cheetahs will be kept and PM Modi will release three of them in an enclosure by operating a lever. After that, other dignitaries will release the remaining cheetahs in other enclosures, he said. The cheetahs will be brought in a special flight of Terra Avia, an airline based at Chisinau, Moldova (in Europe) that operates chartered passenger and cargo flights. In view of the high-profile event, security in the district has stepped up. KNP is situated on the Northern side of Vidhyachal mountains and is spread across 344.686 sq km. It has been named after a tributary of the Chambal River, Kuno.