The Prime Minister pointed out that while these hutments occupied an area of 62 acres, the new offices have come up in just 13 acres 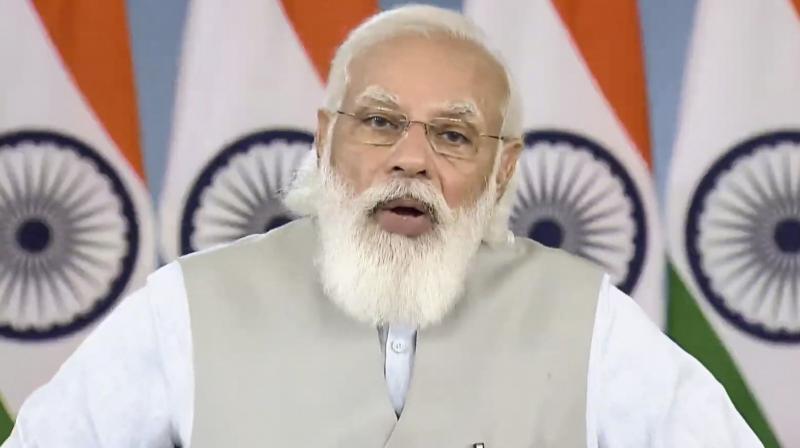 The Prime Minister said that he was confident that work on the new Parliament building will be completed on time. (PTI)

Mr Modi lamented the fact that for so many years defence personnel from Army, Navy and Air Force were  working from hutments constructed by Britishers keeping in mind horse stable and barracks needs.

He said that the critics of Central Vista hide the fact that it also involves construction of such modern offices for defence personnel who were till now working in a bad condition. “Because they knew that their intention of spreading confusion and lies, will not work if these things come to the fore,” said Mr Modi.

“Now the country is watching what we are doing under Central Vista programme,” said Mr Modi. He said that when the government is working on modernisation of Armed forces, giving them new weapons and developing border infrastructure, how could work related to defence and security of the country be allowed to be carried out from old hutments.

The Prime Minister pointed out that while these hutments occupied an area of 62 acres, the new offices have come up in just 13 acres.

The Prime Minister said that he was confident that work on the new Parliament building will be completed on time.

He said that the work of the Defence Office Complex which was to be completed in 24 months has been completed in a record time of just 12 months. The Prime Minister credited this to a new thinking and approach in the government’s functioning. “When policies and intentions are clear, will power is strong and efforts honest, everything is possible”, he said.

The Prime Minister said that with the inauguration of these complexes, India has taken another step in developing the nation’s capital according to needs and aspirations of a new India in the 75th year of India’s independence. “This defence office complex will strengthen the efforts of making the working of our defence forces convenient and effective”, he said.

Prime Minister said that when we talk about the capital, it is not just a city. The capital of any country is a symbol of the thinking, determination, strength and culture of that country. India is the mother of democracy. Therefore, the capital of India should be such, in which there are citizens, people in the center.