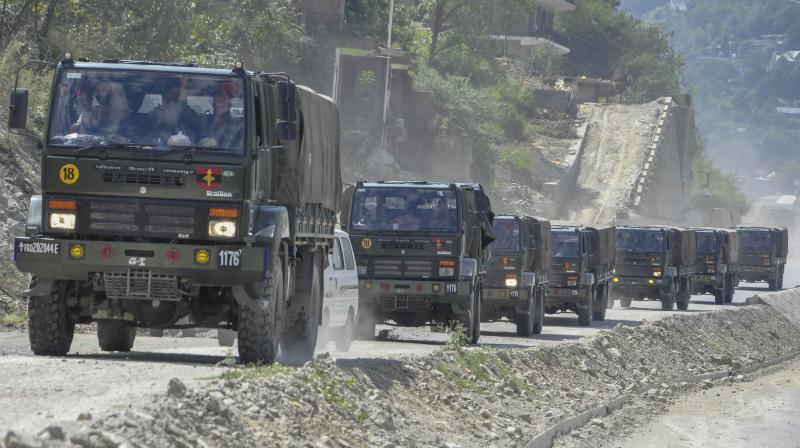 An army convoy carrying military material on its way to Ladakh amid border tension with China, at Manali-Leh highway. — PTI photo

New Delhi: Defence Minister Rajnath Singh on Thursday asserted that no force in the world can stop Indian soldiers from patrolling the country's border in Ladakh region.

Making a statement in Rajya Sabha on the situation in eastern Ladakh, he said China has amassed troops on the border and in response India has made appropriate counter deployment.

China, he said, made "provocative military manoeuvres" on August 29/30 in an attempt to change the status quo in the south bank area of Pangong Lake in the Ladakh region at a time when the two sides were engaged in military and diplomatic talks to de-escalate tensions.

The defence minister said there is a mismatch between what China says and does.

"Unki kathani aur karni alag hai (their actions are at variance with their words)," he said

The skirmishes and face-off in the last few months with China, that left 20 Indian soldiers dead and inflicted heavy casualties on the Chinese sides as well, were primarily over the issue of patrolling the Ladakh border.

"No force in the world can stop Indian soldiers from patrolling. Our soldiers have sacrificed their lives only for this," the minister said.

He was responding to a clarification sought by former defence minister A K Antony on the issue of Indian forces not being allowed to patrol in certain parts of the Galwan valley.

"I want to make it clear (that) skirmishes and face-off are because of this (issue of patrolling)," he said, adding the patrolling pattern is traditional and well defined.

Singh made the statement in Rajya Sabha after the government and opposition agreed not to have a discussion on the sensitive issue.

Chairman M Venkaiah Naidu, however, allowed members to seek a few clarifications on the statement, which was almost identical to the one Singh had made in Lok Sabha on September 15.

The minister said India and China are yet to resolve their boundary question.

"China does not accept the customary and traditional alignment of the boundary between India and China," he said.

"We believe that this alignment is based on well-established geographical principles confirmed by treaties and agreements, as well as historical usage and practice, well-known for centuries to both sides," he said.

China, he said, continues to be in illegal occupation of about 38,000 square kilometers of Ladakh. Besides it also holds 5,180 sq km of Indian territory in Pakistan occupied Kashmir that Pakistan had illegally ceded in 1963.

"I would like to mention here that as yet there is no commonly delineated Line of Actual Control (LAC) in the border areas between India and China and there is no common perception of the entire LAC," he said, adding more than two decade old agreements call for two sides to maintain minimal forces along the LAC.

On the latest situation, the minister said India has noticed a buildup of troops and armaments by China in the border areas adjacent to Eastern Ladakh since April.

"In early May, the Chinese side had taken action to hinder the normal, traditional patrolling pattern of our troops in the Galwan Valley area, which resulted in a face-off," he said.

Even as this situation was being addressed by the Ground Commanders, in mid-May the Chinese side made several attempts to transgress the LAC in other parts of the Western Sector. This included Kongka La, Gogra and North Bank of Pangong Lake.

"These attempts were detected early and consequently responded to appropriately by our armed forces," he said.

"We made it clear to the Chinese side both through diplomatic and military channels that China was, by such actions, attempting to unilaterally alter the status quo. It was categorically conveyed that this was unacceptable," Singh said.

Given the growing friction along the LAC, the senior commanders of the two sides in a meeting on June 6, 2020 agreed on a process of disengagement that involved reciprocal actions.

"Both sides also agreed to respect and abide by the LAC and not undertake any activity to alter the status quo," he said.

"However in violation of this the Chinese side created a violent face off on June 15 at Galwan. Our brave soldiers laid down their lives and also inflicted costs including casualties on the Chinese side," he said.

Indian armed forces have during these provocative actions maintained "sayyam" (restrain) and displayed "shaurya" (valour) to protect the territorial integrity of India, he said.

Giving details of the talks held with China to de-esclate the tension, the minister said India pressed for three key principles -- strictly respecting the LAC, not attempting to alter the status quo unilaterally, and abiding by all agreements and understandings between the two sides.

The Chinese side, on its part, took the position that the situation should be handled in a responsible manner and ensure peace and tranquillity as per bilateral agreements and protocol.

China made provocative military manoeuvres late last month even when these discussions were on, he said.

"As is clear from these events, the Chinese actions reflect a disregard of our various bilateral agreements. The amassing of the troops by China goes against the 1993 and 1996 agreements," the minister said.

Respecting and strictly observing the LAC is the basis for peace and tranquillity in the border areas and explicitly recognized in both 1993 and 1996 agreements.

"While our armed forces abide scrupulously by it, this has not been reciprocated by the Chinese side. Their actions have led to face-offs and frictions from time to time along the LAC," he said.

The incidents and "the violent conduct of Chinese forces" has been in complete violation of all mutually agreed norms, he said.

Singh said China has mobilised a large number of troops and armaments along the LAC as well as in the depth areas.

"There are several friction areas in Eastern Ladakh including Gogra, Kongka La and North and South Banks of the Pangong Lake," he said.

In response to China's actions, Indian armed forces have also made appropriate counter deployments in these areas to ensure that national security interests are fully protected.

"I would like to emphasise, that India remains committed to resolving the current issues in our border areas through peaceful dialogue and consultations," he said, referring to his meeting with his Chinese counterpart in Moscow on September 4.

"I conveyed in clear terms our concerns related to the actions of the Chinese side, including amassing of large number of troops, their aggressive behaviour and attempts to unilaterally alter the status quo that were in violation of bilateral agreements," he added.