India   All India  17 Sep 2019  'PoK is part of India. We will physically occupy it,' says Foreign Minister S Jaishankar
India, All India

'PoK is part of India. We will physically occupy it,' says Foreign Minister S Jaishankar

The government has said the move will ensure that Jammu and Kashmir gets the same benefits as the rest of the country. 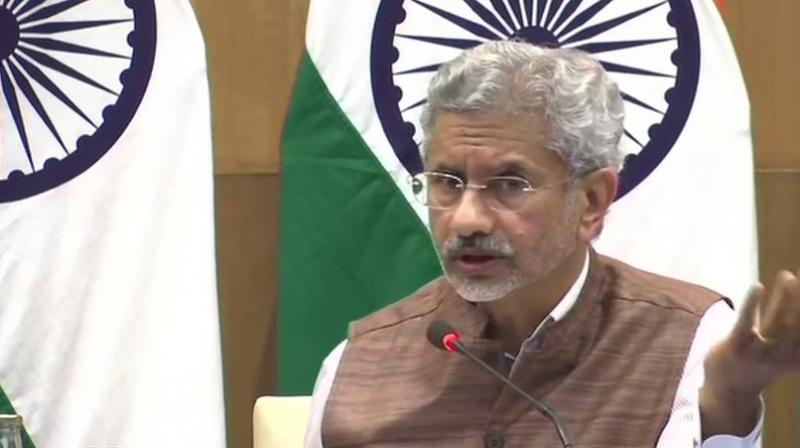 New Delhi: External Affairs Minister S Jaishankar, on Tuesday, said that Pakistan Occupied Kashmir (PoK) belongs to India and "we expect to have physical jurisdiction over it one day".

He also said there was no need to "worry" beyond a point about what people would say on Jammu and Kashmir and that India's position on its internal issues has and would prevail.

"PoK is part of India and we expect one day that we will have the jurisdiction, physical jurisdiction over it," Jaishankar said at a press conference.

Defence Minister Rajnath Singh and Vice President M Venkaiah Naidu have made similar statements in recent weeks, amid Pakistan's attempts to internationalise Kashmir after India's decision to end special status to Jammu and Kashmir under Article 370 and split it into two Union Territories. The government has said the move will ensure that Jammu and Kashmir gets the same benefits as the rest of the country.

Pakistan has condemned the action and has vowed to take it up at the UN.

On the possibility of Prime Minister Narendra Modi and Pakistan PM Imran Khan meeting at the UN General Assembly session in New York later this month, the minister said: "Just look at the climate of relations right now and that should give you the answer."

Jaishankar also responded to questions on the way foreign media has been reporting the security measures in Jammu and Kashmir since Article 370 move. "People are entitled to their views. I have rarely seen a story from anyone that 370 was a temporary provision," he said.

"Don't worry about what people will say on Jammu and Kashmir. India's position clear since 1972. On my issue, my position will prevail. I've spent a lot of my working life dealing with the US Congress. They say a lot of things because people go to individual members, and say 'you need to say this'."

On Monday, US President Donald Trump said he would meet both PM Modi and Imran Khan soon. He also said he thought a "lot of progress had been made".

To a question on what message the "Howdy, Modi!" event in Houston on Sunday - which Trump and PM Modi are expected to address jointly -- held for Pakistan, Mr Jaishankar said: "It's not just Pakistan...the whole world will be watching the Houston event and take lessons from what Indian Americans have achieved. There are multiple messages there. It's for the Pakistanis to read what they wish into it."

Jaishankar said Pakistan would remain a "unique challenge" until it "successfully" addressed cross-border terrorism and "becomes a normal neighbour".

"Show me anywhere else in the world where a country conducts terrorism against its neighbour as part of its foreign policy," Jaishankar said.

He added: "Pakistan is only talking but actually doing nothing on terrorism. Our position is normal and rational. Their behaviour is an aberration, the abnormality is there."