The purported video of incident showed that 2 police personnel were 'present at the spot when the victim was alive and lying unattended'. 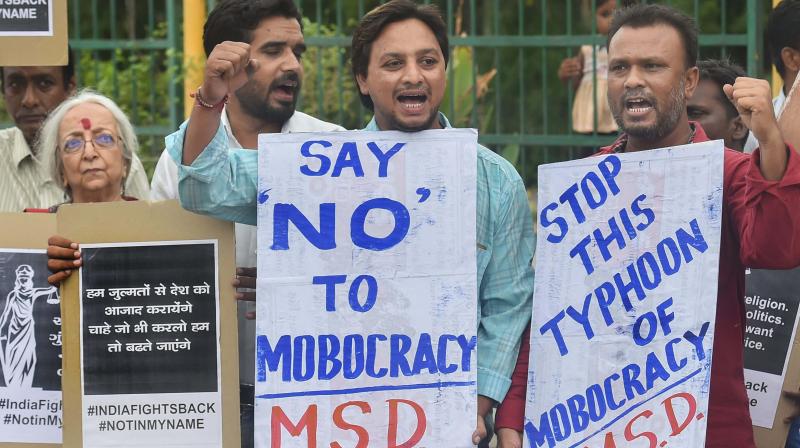 Farooque Khan, a resident of Thoubal district, was lynched by an irate mob early Thursday at Tharoijam area in West Imphal on suspicion that he had stolen a two-wheeler. (Representational Image | PTI)

Imphal: Three days after a 26-year-old man was lynched in Imphal West district on suspicion of being a vehicle lifter, police have suspended a sub-inspector and terminated the services of three other officers.

The purported video of the incident, which went viral on social media, showed that the four police personnel were "present at the spot when the victim was alive and lying unattended", Imphal West SP Jogeshwar Haobijam told news agency PTI.

Farooque Khan, a resident of Thoubal district, was lynched by an irate mob early Thursday at Tharoijam area in West Imphal on suspicion that he had stolen a two-wheeler.

Two others with Khan, who managed to escape, have not been identified so far.

Local people set afire a car believed to have been used by the "two associates" of Ahmed.

"One sub-inspector has been suspended while three personnel of Village Defence Forces were terminated on Sunday as one of the several videos of the incident circulating on social media showed that the four personnel were present at the spot when Khan was lying unattended," Haobijam said.

The episode has triggered sharp condemnations and sit-in protests by various social activists in the area. The Manipur Human Rights Commission took up the case suo-motu and directed the state director general of police to probe the matter and submit a report by September 22.

Five people, including a ‘havaldar’ attached to the India Reserve Battalion (IRB), have been arrested in connection with the incident so far.

Several purported videos of a bleeding Khan were found doing the rounds on social media, prompting the Cyber Crime Unit to also take action against those who uploaded the clips, the SP said.

"We are still investigating into the incident. Stern action will be taken against everyone involved in the case," he added.