India   All India  17 Sep 2017  No point of diplomatic talks unless Pak stops export of terrorism to India: Rajnath
India, All India

No point of diplomatic talks unless Pak stops export of terrorism to India: Rajnath

He said that India is no longer weak, and is emerging as a superpower that 'nobody would dare to challenge'. 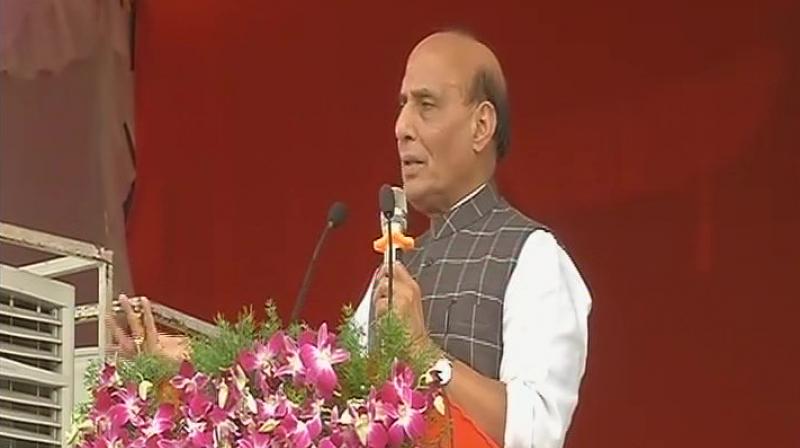 Nizamabad: Home Minister Rajnath Singh on Sunday categorically stated that unless Pakistan puts an end to the 'export' of terrorism to India, there will be no point in holding diplomatic talks between the two nations.

Addressing a Bharatiya Janata Party (BJP) rally in Nizamabad, Rajnath claimed that India has always extended its cooperation to Pakistan in maintaining friendly relations with its neighbour, but no substantial response has been given. Rather, attempts have been made to further weaken India, he said.

"India aims to maintain friendly relations with all countries, and the same goes for Pakistan. When Prime Minister Narendra Modi called for a meeting with their leaders, it was to build a better relation. But they do not seem to understand the point. Unless cross-border terrorism ends, there will be no point in holding talks," he said.

"When firing began from Pakistan side during the ceasefire violation, I was informed by the Director General of the Border Security Force ( BSF) that India had waved a white flag as a gesture of wanting to resolve the matter by holding talks. However, since no response was given, I ordered them that India will not begin any gun battle; but in retaliation, if firing is required then India will no longer hold back," he added.

Re-iterating Modi's vision of creating a 'New India' by 2022, Rajnath stated that India is no longer weak, and is emerging as a superpower that 'nobody would dare to challenge'. He also opined that if India can move from being colonized to gaining Independence in five years, even the mission of New India can be fulfilled.

With regards to the action taken against black money, benami property and shell companies, Rajnath stated that although waging a war against corruption was not easy, all necessary measures were taken to end the menace in the society, following which over two lakh shell companies and Rs 800 crore worth of benami property has been seized so far.

"During the previous government, corruption charges always existed. Many of them have even gone to jail. The Supreme Court demanded that an SIT be constituted, but this was not done. Under Prime Minister Modi, we made it to end corruption in the society. We have seized benami property worth Rs. 800 Crore along with a crackdown on nearly 2 lakh shell companies. We will continue to wage our war against corruption, and bring out a New India with no poverty, homelessness, terrorism or naxalism," assured Rajnath.

Re-iterating the emphasis of the government on uplifting the common man, Rajnath claimed that many medical subsidies have been brought in to ensure better medical facilities to the poor, such as that on stents, medicines and procedures like dialysis and so on.

Remembering those who fought for India's freedom, Rajnath urged that India should not be divided based on any caste, creed, language or religion, adding that anti-national forces opposing our unity will not be tolerated.