Shift in India’s ‘no first use’ nuclear doctrine?

Prime Minister Narendra Modi had said in the course of the 2019 Lok Sabha election campaign that India had “not kept the nuclear bombs for Diwali”. 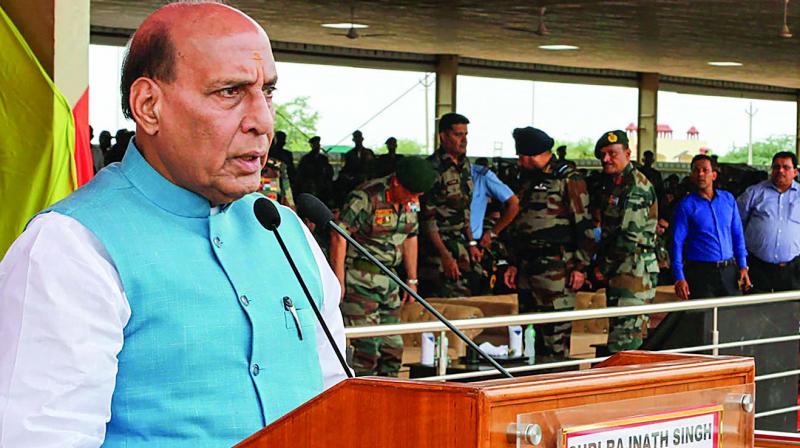 New Delhi: Defence minister Rajnath Singh said while India was “firmly committed” to its “no first use” doctrine on nuclear weapons, what happens in the future “will depend on the circumstances”.

He was speaking at a function while on a visit to Pokhran in Rajasthan on the first death anniversary of former Prime Minister Atal Behari Vajpayee. “Pokhran is the area which witnessed Atalji’s firm resolve to make India a nuclear power and yet remain firmly committed to the doctrine of ‘no first use’. India has strictly adhered to this doctrine. What happens in future depends on the circumstances,” the defence minister tweeted. He said India attaining the status of a responsible nuclear nation became a matter of national pride for every citizen of this country.

Pokhran was also the site of India’s first nuclear test in 1974 under the Indira Gandhi government.

Immediately after conducting nuclear tests in 1998, India had declared a “no first use” policy under which “India will not be the first to initiate a nuclear strike, but will respond with punitive retaliation should deterrence fail”.

The defence minister’s statement comes at a time when there is heightened tension with Pakistan over India’s decision to revoke Article 370 of the Constitution, which accorded a special status to Jammu and Kashmir.

Many people, including strategic experts, have questioned the need for India to have a “no first use” policy, specially when Pakistan does not have it.

Lt. Gen. D.S. Hooda (Retd) said every doctrine needs a regular review. “We should be ready to review our nuclear doctrine. I think the defence minister is right... You cannot have a doctrine written in stone and that cannot be changed. I think we should remain flexible on how we look at our doctrine,” Gen. Hooda added.

Lt. Gen. Satish Dua, a former chief of the Integrated Defence Staff (IDS), said when the nuclear doctrine was formed “we were assuring the world... and that assurance still remains”. “What the defence minister is essentially saying is that if there is a situation that demands that we take a fresh look, then it can be considered. We are not saying we are going to nuke. We are saying that option is not off the table if the context changes,” he added.

Prime Minister Narendra Modi had said in the course of the 2019 Lok Sabha election campaign that India had “not kept the nuclear bombs for Diwali”.

In 2016, then defence minister Manohar Parrikar had said India should say it will use its nuclear powers “responsibly” instead of stressing on “no first use”. “Why should I bind myself? I should say that I am a responsible nuclear power and I will not use it irresponsibly,” he had said. However, the defence ministry had later clarified that Parrikar’s comment was his personal opinion, and did not reflect the government’s policy.

Agencies add: The Congress Party said on Friday that the government should clearly spell out its nuclear policy, and remove any ambiguity over it. Congress spokesman Abhishek “Manu” Singhvi said his party and the entire country stood behind the government on the country’s nuclear policy, but it needed to be spelt out clearly. “If by this somewhat ambiguous statement, the defence minister either intends to keep us guessing or seeks to announce a change in policy, then the country would be happy to know what the new policy is. Not in ambiguous half-phrases, but in a full one paragraph declared policy,” Mr Singhvi said.

“This is a very serious issue and it cannot be communicated in ambiguity. There is need for clarity on this and I urge the government to come out clearly,” he added.