J&K curbs, phone links to be gradually eased in phases

All means of communication, including mobile and landline phones as well as the Internet, were severed simultaneously. 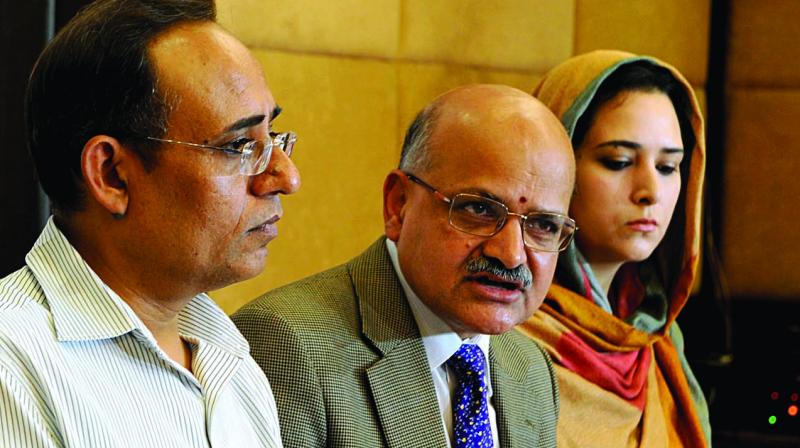 Srinagar: The Jammu and Kashmir government said Friday that it is taking measures to ease the restrictions imposed across the state earlier this month in a gradual manner.

“Keeping in view the evolving situation, as well as the cooperation of the people in maintaining calm and peace, we are now taking measures to ease the restrictions in a gradual manner,” state chief secretary B.V.R. Subrahmanyam announced at a press conference here on Friday.

He said that the easing of restrictions would begin “in an orderly way” after the Friday prayers which, as per an official statement, had passed off peacefully.

The entire Kashmir Valley, most parts of the Jammu region and Kargil district of Ladakh were placed under unofficial curfew or security restrictions in anticipation of trouble on the night of August 4 ahead of home minister Amiit Shah moving a resolution in Parliament on the abrogation of the special status for Jammu and Kashmir under Article 370 of the Constitution and a bill for splitting the state into two Union territories.

All means of communication, including mobile and landline phones as well as the Internet, were severed simultaneously. Also, the police went on an arrest spree across the state and among held were the leaders and key activists of mainstream political parties.

However, the chief secretary said the tough measures were initiated by the government as a precaution in view of the history of “cross-border terrorism”. He said: “An important factor in doing so was credible inputs that terrorist organisations including Lashkar-e-Tayyaba, Jaish-e-Mohammed and Hizbul Mujahideen were planning to undertake strikes in the state in the immediate future.”

He added: “Similar measures have had to be taken in the past following violent incidents. This time these measures were taken by way of precaution, keeping in view the safety and well-being of the public at large.”

The chief secretary said as of Friday afternoon, 12 of the state’s 22 districts were functioning normally, with some limited night-time restrictions in five of these. “The measures put in place have ensured that there has been not a single loss of life or serious injuries to anyone in the course of maintaining peace and order. We’ve prevented any loss of human life despite concerted efforts by terrorist organisations, radical groups and continuing efforts by Pakistan to destabilise the situation,” he said.

He said the communications blockade will be lifted gradually. He indicated, however, that mobile phone services may be shut for some more time. He said: “Telecom connectivity will be gradually restored in a phased manner, keeping in mind the constant threat posed by terrorist organisations in using mobile connectivity to organise terror actions.”

Mr Subrahmanyam justified the detention of political leaders and activists and members of various trade and civil society groups, and said these measures were of a preventive nature, taken in accordance with the provisions of the law “to maintain law and order and avoid breach of the peace.” He said such detentions were being continuously reviewed and “appropriate” decisions will be made on the basis of law and order assessments.

He said that schools will be opened area-wise after the weekend “so that students do not suffer”. He said that as the restrictions on the movement of people are removed “area by area”, public transport will resume moving in these areas. He claimed that government offices had been made fully functional from Friday itself. “It is expected that over the next few days, as the restrictions get eased, life in Jammu and Kashmir will become completely normal. This is already visible on the roads which have seen a steady return to regular traffic,” he said.

The official further said the government appreciates it is the cooperation of the state’s people that is critical to help maintain peace and public order. “Its focus is on the earliest return to normality while ensuring that terrorist forces are given no opportunity to wreak havoc as in the past,” he added.