On August 14, Odisha CM had announced that the state government would provide per day Rs 60 each to adults and Rs 45 per child. 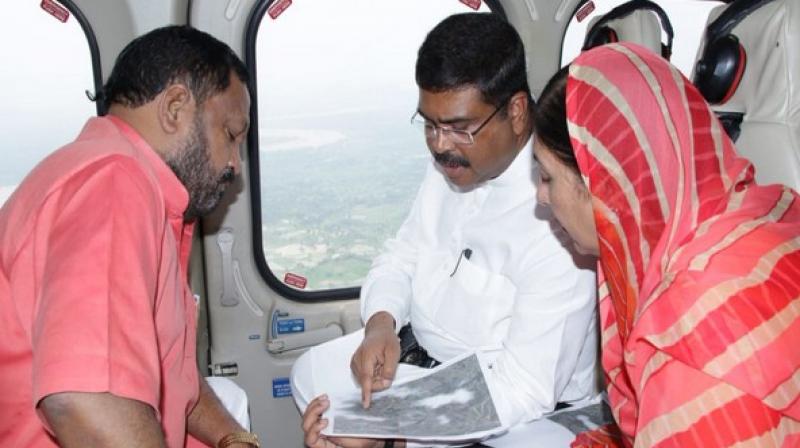 Bhubaneswar: Union Minister for Petroleum and Natural Gas, Dharmendra Pradhan, on Saturday conducted an aerial survey to take stock of the loss and destruction in the flood-affected areas of Kalahandi, Boudh, Subarnapur and Balangir districts.

The three BJP leaders reviewed the undergoing relief and restoration work in these districts.

On August 14, Odisha Chief Minister Naveen Patnaik had announced that the state government would provide per day Rs 60 each to adults and Rs 45 per child in the affected areas.

He had also interacted with the concerned Collectors through video conferencing and asked them about the requirements, the Chief Minister's Office (CMO) had said in a statement.

Earlier this week, Odisha Special Relief Commissioner Bishnupada Sethi had written to nine district Collectors to submit an assessment report by August 17 (today) on the damage caused to public properties due to recent flood and torrential rainfall in the state.

The weather agency Skymet has predicted fair amount of rainfall in Sundergarh, Keonjhar, Mayurbhanj and Balasore on August 18 and 19, along with one or two places in Gajapati and Malkangiri districts.