It is also important that all the Kashmiri politicians arrested after the change in J&K’s status must be set free without delay. 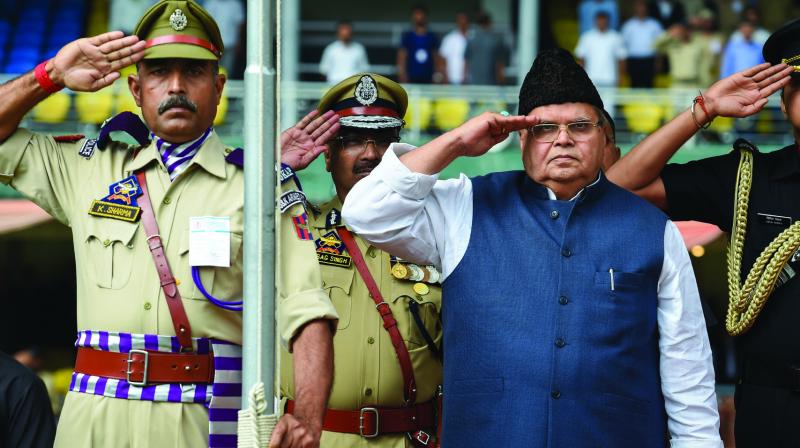 Jammu and Kashmir governor Satya Pal Malik salutes as he hoists the tricolour to mark Independence Day in Srinagar on Thursday. (Photo: PTI)

After the abrogation of the special status of Jammu and Kashmir and the state’s bifurcation as well as its downgrade to a Union territory, the Kashmir Valley has been placed under a veritable blockade by the Centre, causing extreme concern in the context of people’s lives in such conditions, and the scope for the violation of human rights.

These have agitated the Opposition parties from the start. It is time the government took upon itself the responsibility to take the entire political spectrum into confidence about the steps taken in respect of Kashmir, particularly those that will have a direct bearing on the lives of ordinary people.

So far, all that the government has done is to pat itself on the back, relied on partisan sections of the media to sing its praise, and sought to secure sanction from social media group activity, a lot of which is influenced by governing party ideologies.

This kind of approval has been sought to be gathered even as the Valley labours under curfew-like conditions. There is a news and communications blackout in addition to very strict curbs on local transportation. Except for functionaries of the state, contacts with Kashmir for practically everyone else has ceased. Hundreds of Kashmir politicians have been arrested.

These are perfect conditions for rumours and unattested stories to float, and such stories could be fodder for interested parties when an informal meeting of the UN Security Council is held to discuss the Kashmir question. Pakistan and China are behind the move.

J&K chief secretary B.V.R. Subrahmanyam informed the media on Friday that many of the curbs would shortly be eased. This is likely to be interpreted as a concession to international opinion hours before the discussion at the UNSC is due.

In this climate, let the government also call an all-party meeting, which Congress leader Rahul Gandhi had sought earlier this week. When he made the demand, J&K governor Satya Pal Malik sought to mock him — showing disdain for the democratic Opposition — saying that he would send an aircraft to bring Mr Gandhi to Kashmir for a dekko. The former Congress president had disdainfully replied that he only sought the freedom for all Opposition leaders to go around in the state to understand how people were faring under conditions of repression.

Even if permitting the government’s opponents may seem like pandering to international opinion at this juncture, the government should not hesitate. This is because speaking to the Opposition parties could provide a salve to the populace in Kashmir. This would serve a larger national purpose.

It is also important that all the Kashmiri politicians arrested after the change in J&K’s status must be set free without delay. In a democracy, they have the responsibility to speak up and agitate on behalf of the people.