Indians will reflect on Vajpayee's many contributions that led to India's rise as a global and economic power, said Mike Pompeo. 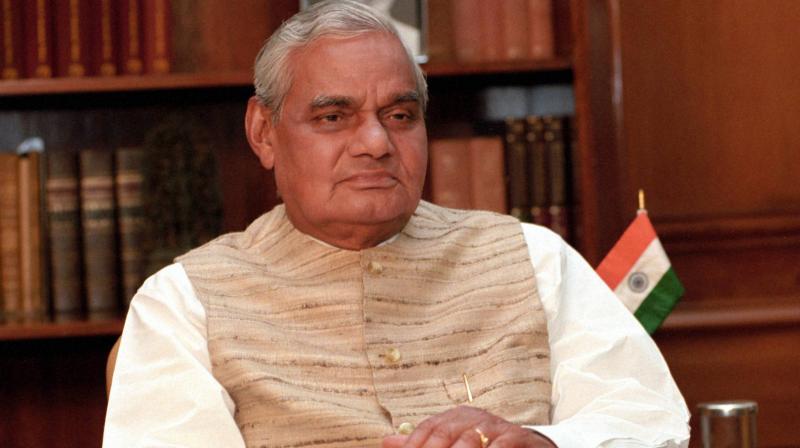 Vajpayee, one of India's most charismatic leaders and inspirational orators, died on Thursday at the age of 93. (Photo: File/PTI)

New Delhi/New York: Atal Bihari Vajpayee recognised early on that the US-India partnership would contribute to the world's economic prosperity and security and the two democracies continue to benefit from his vision, US Secretary of State Michael Pompeo has said while condoling the death of the former Prime Minister.

Vajpayee, one of India's most charismatic leaders and inspirational orators, died on Thursday at the age of 93.

His death was announced by the All India Institute of Medical Sciences (AIIMS) hospital where he was admitted on June 11 with a variety of ailments. AIIMS said his condition was stable for the last nine weeks, but it deteriorated over the last 36 hours and he was put on life support systems.

"On behalf of the people of the United States of America, I extend my heartfelt condolences to the people of India on the recent passing of Former Prime Minister Atal Bihari Vajpayee," Pompeo said in a statement on Thursday.

He said Indians will reflect on Vajpayee's many contributions that led to India's rise as a global and economic power.

"He championed tirelessly for his country's development and demonstrated a devotion to improving the lives of every Indian," Pompeo said.

The top US diplomat recalled Vajpayee's address to the United States Congress in 2000, when he had famously characterized US-India ties as a "natural partnership of shared endeavours".

Vajpayee "recognized early on that the United States and India, based on their shared democratic values, could develop a partnership that would contribute to the economic prosperity and security of the region and the world. Today, our two countries and our bilateral relationship continue to benefit from Prime Minister Vajpayee's vision, which helped promote expanded cooperation," Pompeo said.

.@SecPompeo: On behalf of the American people, I extend my heartfelt condolences to the people of #India on the passing of Former Prime Minister Atal Bihari Vajpayee. Today, our two countries & our bilateral relationship continue to benefit from Prime Minister Vajpayee’s vision. pic.twitter.com/2mtaOQhYmg

Many other world leaders too condoled the death of the former Prime Minister.

Russian President, Vladimir Putin, sent a message of condolence to President Kovind and PM Modi, calling Atal Bihari Vajpayee "a politician who made a major personal contribution to the friendly relations and privileged strategic partnership between our countries.”

He added that the great leader had "rightly commanded great respect around the world"  and conveyed sympathy and support to Vajpayee's family, and the government and people of India.

Vladimir Putin sent a message of condolences to Ram Nath Kovind and Narendra Modi on the passing of Atal Bihari Vajpayee https://t.co/K9rYP2wV8y

Pakistan's Prime Minister in waiting, Imran Khan said that Vajpayee's efforts to better the India-Pakistan relationship will always be remembered.

In a statement he added, "As Prime Minister, Vajpayee sahab took the initiative to further improving Indo- Pakistan relations. With the death of Vajpayee sahab, South Asian politics now left with a huge political vacuum. There can be political differences but both sides of the border want peace. It is only through establishing peace that we can really honour the legacy of Atal Bihari Vajpayee. In this moment of grief following the demise of Atal Bihari Vajpayee, I stand with the people of India."

Maithripala Sirisena, the President of Sri Lanka, wrote that Sri Lanka had lost "a great humanist and a true friend", calling the former PM "a visionary leader and an ardent defender of democracy."

Today, we have lost a great humanist and a true friend of Sri Lanka. Former Prime Minister of India Atal Bihari Vajpayee was a visionary leader and an ardent defender of democracy. My condolences to his family and millions of his admirers around the world. #AtalBihariVajpayee

" Heartfelt condolences to the Government and people of India on the passing of #AtalBihariVajpayee. The world will celebrate him as an exemplary statesman." he wrote.

Heartfelt condolences to the Government and people of India on the passing of #AtalBihariVajpayee. The world will celebrate him as an exemplary statesman.

Yuval Rotem, the Director General of the Ministry of Foreign Affairs of Israel said that he was "deeply saddened to learn of the death of a giant" and offered his heartfelt condolences to the people of India for their loss.

I was deeply saddenned to learn of the death of a giant - #India's former PM #AtalBihariVajpayee.

I offer my heartfelt condolences to the people of India at their loss. pic.twitter.com/thwQmbDJTA

Vajpayee, a diabetic, had only one functional kidney. He suffered a stroke in 2009 that weakened his cognitive abilities. Subsequently, he developed dementia.

He had joined the Rastriya Swamsevak Sangha (RSS) in 1947 and rose through ranks to become a stalwart of the BJP and was the first non-Congress prime minister to complete a full term in office. A 10-time MP of the Lok Sabha, Vajpayee announced his retirement from politics in 2005. He was also a member of the Rajya Sabha twice.

Born on December 25, 1924 in Gwalior in Madhya Pradesh to a schoolteacher, Vajpayee did his M A in political science. Following a brief flirtation with communism, he became a full-time worker of RSS in 1947.

Vajpayee, a bachelor, is survived by his adopted daughter Namita Kaul Bhattacharya.