The man who saw tomorrow: How Lahore bus was born

Nobody but a handful of Pakistani generals, who had boycotted the welcome ceremony as he got off the bus, did. 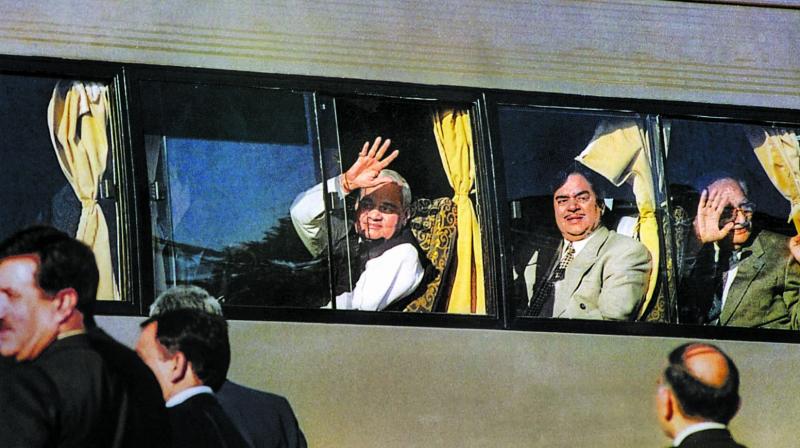 Bengaluru: Atal Behari Vajpayee’s ability to seize the moment and turn it to his advantage, captivating his audience with the power of both poetry and prose, was never in doubt; his oratory legendary, the long pause before delivering the punchline his leitmotif.

But at the Minar-e-Pakistan in Lahore on February 19, 1999, Pakistan’s eponymous monument to its creation, the statesman-poet did more than that. He reduced every Pakistani in that gathering, from hardened diplomats and Lahore socialites as well as the ordinary Lahori, to tears as he promised that Indian tanks would never roll into Pakistan again. There wasn’t a dry eye in that audience.

He didn’t know then that Pakistan’s Army chief had already put Kargil into play. Nobody but a handful of Pakistani generals, who had boycotted the welcome ceremony as he got off the bus, did.

But that evening, as Prime Minister Vajpayee spoke, within sight of the Badshahi Mosque, and recited his poem “Hum jang na hone denge,..pyar karen ya vaar karen, dono ko hi sehna hain, teen bar lad chuke ladayi, kitna mehnga sauda... hum jang na hone denge...” (I won’t allow war... whether we love or quarrel, we have to bear both, we have gone to war thrice, a steep price to pay... I won’t allow another war), he disarmed everyone in that audience, including the many sceptics in the journalistic community standing next to me, closely aligned to the Pakistan Army who had only minutes before the speech torn Pakistan PM Nawaz Sharif apart for hosting the Indian Prime Minister.

Arriving in a bus just hours before, alongside his close friends and aides, national security adviser Brajesh Mishra and external affairs minister Jaswant Singh, and of course Bollywood’s Dev Anand, there was no missing the Indian Army tanks from the 1965 war that still sit on the outskirts of the Pakistan Punjab capital, and served as a daily reminder of their “untrustworthy” neighbour.

Few know, however, that the seed for the Lahore summit was planted in Colombo, where within minutes of meeting Pakistan’s young Prime Minister Nawaz Sharif in the Sri Lankan capital on the sidelines of the Saarc summit, Prime Minister Vajpayee quickly realised that this was probably a man that India could do business with. The two PMs sent their aides away, and as Mr Sharif admitted to me in an interview at his London home in 2006, they met alone and spoke for another half an hour before entrusting the “Wagah to Lahore bus diplomacy” plan to their aides.

In an interview at his Park Lane residence in London in February 2006, he described Vajpayee — and himself — as “the architects of peace”.

“Peace with India can only happen when the leaders of both the countries trust one another, like Prime Minister Vajpayee and I did. We had an equation, we clicked, we had Lahore. Peace between our two countries has been possible only when elected governments are in place; leaders who represent the aspiration, sentiments of the people try to come together, bridge differences,” Mr Sharif, who was then in exile, said.

Mr Sharif objected very strongly in that same interview to Prime Minister Vajpayee reaching out to his arch-enemy, President Pervez Musharraf, barely two years later to host a India-Pakistan summit in Agra, which unlike Lahore did not see an agreement, and ended extremely badly.

In fact, this was quintessentially Vajpayee; showing his ability to see beyond the here and now, and look into the future that drove him to accept the hand of friendship that Nawaz Sharif extended to him when they met at the Saarc summit in Colombo in July 1998. And again, when he reached out to Pervez Musharraf, the Kargil mastermind, the man who had brought nuclear-powered India and Pakistan to the brink.