India   All India  17 Aug 2018  Relief from across India pours in for Kerala as state reels under deadly floods
India, All India

324 people have died and over 2 lakh have been rendered homeless as Kerala encounters worst floods in 100 years. 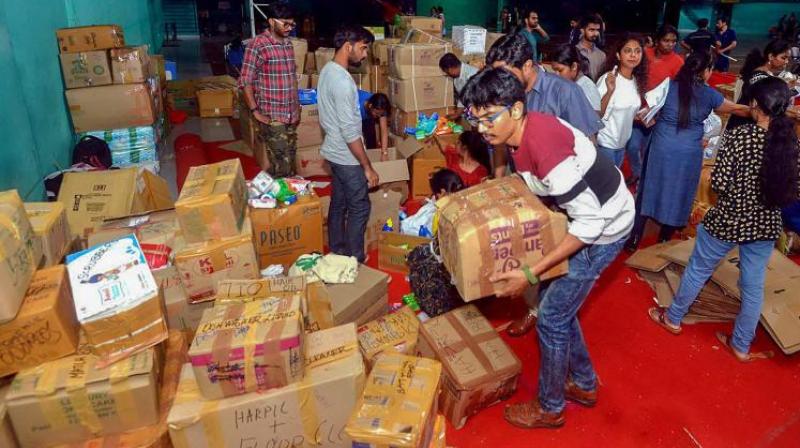 Thiruvananthapuram: With at least 324 people dead and over 2 lakh rendered homeless, Kerala is witnessing its worst floods in 100 years.

The massive floods triggered by incessant rains have severely disrupted the normal life of people leaving them in deep misery as they face a shortage of food, water and basic healthcare facilities.

However, the Centre, governments of other states and various private organisations and individuals are stepping in to provide assistance to the flood-ravaged state.

Telangana government has also announced an assistance of Rs 25 crore to the state. Chief Minister K Chandrasekhar Rao has also instructed that water purifying machines worth Rs 2.50 crore be supplied to Kerala as drinking water gets polluted due to floods.

The Women and Child Development Ministry (WCD) on Friday announced that it is coordinating with the Air Force and Kerala government to deliver 100 metric tonnes of ready-to-eat food packets to the flood-affected children in the state.

Punjab has also announced Rs 10 crore immediate relief for the flood-affected state. According to an official statement, while Rs 5 crore is being transferred from the Punjab Chief Minister's Relief Fund to Kerala counterpart's relief fund, the remaining Rs 5 crore will be in the form of ready-to-eat food material and other supplies, to be flown there with the help of the Defence Ministry.

Punjab Chief Minister Amarinder Singh has also appealed state government employees to extend similar help and has urged various NGOs and philanthropic organisations in the state to extend all possible help to the people in Kerala.

Delhi Chief Minister Arvind Kejriwal also contributed Rs 10 crore to Kerala relief fund and has appealed to the people to generously donate for the people of the flood-hit state.

Star India has partnered with Non-Governmental organisation ‘Goonj’ for the supply of essentials to the flood victims.

The broadcaster also said that it would air campaigns across its 50 channels, urging viewers to contribute for Kerala.

Similarly, a seven-wagon train carrying 2.8 lakh litres of water and a 15-wagon special also commenced its journey to the neighbouring state, it said.